MENUCLOSE
First Day on the Job

First Day on the Job 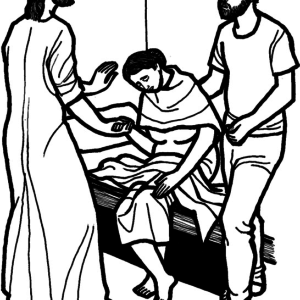 Many of us have been there, the first day on the job at some big box store.  You arrive fifteen minutes early to clock in; make sure to label your brown bag lunch before putting it in the break room refrigerator; keep anxiously checking the mirror to make sure your uniform is in place.  You hope during those initial eight hours to just get oriented, make a good impression on your supervisor and not cause any trouble in front of the boss.

Here in chapter one of Mark’s Gospel, Jesus begins his public ministry. But no one apparently pulled Jesus aside and told him how to act on his first day of work.  Instead of being the compliant son of Joseph, he trades in his shop apron for a robe of righteousness as the Son of God.  What then do we learn about Jesus from his first day on the job?

Mark 1:29-39 As soon as they left the synagogue, they entered the house of Simon and Andrew, with James and John. Now Simon’s mother-in-law was in bed with a fever, and they told him about her at once. He came and took her by the hand and lifted her up. Then the fever left her, and she began to serve them. That evening, at sundown, they brought to him all who were sick or possessed with demons. And the whole city was gathered around the door. And he cured many who were sick with various diseases, and cast out many demons; and he would not permit the demons to speak, because they knew him. In the morning, while it was still very dark, he got up and went out to a deserted place, and there he prayed. And Simon and his companions hunted for him. When they found him, they said to him, “Everyone is searching for you.” He answered, “Let us go on to the neighboring towns, so that I may proclaim the message there also; for that is what I came out to do.” And he went throughout Galilee, proclaiming the message in their synagogues and casting out demons.

Congregational Responses:
-He has no interest in being a celebrity pastor, instead moving onto the next town.
-In his attempt at self-care, he didn’t go far enough away to get a day off.
-He’s unwilling to let the expectations of gender roles impede his calling to heal.

I’ve been on three mission trips to an orphanage in Bolivia.  The ten days in country are filled with hard labor: digging latrines with rudimentary tools for the locals to have an outhouse, hauling gravel up from the riverbed to repair the dirt road, mixing concrete by hand so the orphans will have a retaining wall to protect their beloved soccer field. But the act of ministry that stays with me every bit as much happens before we even leave the airport in La Paz.  Because of institutional corruption and inadequate hospitals, every member of the mission team is asked to smuggle medical supplies and medicine into the country.  Penicillin in someone’s suitcase; Tylenol in another’s backpack; prescription glasses in a duffel bag; Band-Aids in a carryon.  The moment of consequence comes right after landing when you approach the customs window and see the military personnel with automatic rifles and the luggage ahead of you being searched by police dogs.  Then it’s your turn to hand over your passport and stand in front of the glass and be asked by the government official, “Senior Combs, are you traveling for business or pleasure?” “Do you have anything to declare beyond your personal effects?” “Are you bringing anything into Bolivia illegally?”  Before answering, like many of the other team members, I ask myself, “What laws am I willing to break for my faith?”

The Law of Judaism forbid work on the Sabbath.  But Jesus defied Torah on Sunday to avoid the mother-in-law’s funeral on Monday.  The Law of healthcare required payment in full before treatment began.  But Jesus decided the divine physician does house calls for free. The Law of Deuteronomy created social hierarchies with only the pure people at the top.  But Jesus took God directly to the sick, dirty and contaminated people suffering at the very bottom.  The Law of social decorum said rabbis don’t enter the dark bedrooms of women who are not their wives.  But Jesus refused to be restrained by taboo, healing instead through the power of scandalous touch.

What we learn about Jesus on his first day of work is that he has no intention of being primarily a law-abiding citizen.  And neither should we.  So for those of us who have gotten our Christianity confused with making a good impression, the calling could not be more clear: as long as someone is dying of fever, let us act out in the name of recovery.