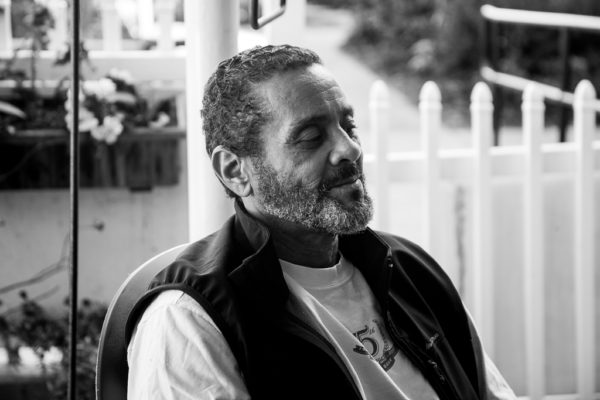 Andre looks so cozy. He’s in the living room, kicked back in a recliner. A knit blanket wraps under his toes and is pulled tight beneath his chin. There’s a horrible B-movie playing—a surefire induction method for a mid-day nap.

I might have left Andre alone if he hadn’t been leaving a trail of great short stories all over Respite. And anyway, I had warned him that I’d be sitting down to collect some of these stories before he left. So, when I see the empty recliner next to his, I settle in.

Andre grew up on the lower east side of Manhattan. My favorite thing about conversing with a Manhattanite, is how they talk in numbers—“Our place was at 77th and 1st…all us kids went to p.s. 151.” The numerical grid of that city has a way of imprinting for a lifetime.

It’s interesting to me where people choose to start their story. Andre starts his at age seven when he ran away from home to hang out in Central Park. There’s a lot of points in Andre’s story where he describes his mom as “highly pissed.” This is the first.

By eight, he found himself joining his first gang ‘Ace of Spades’—a junior league to ‘Black of Spades.’ After getting beat up pretty bad, his dad enrolled him in Karate where he eventually earned his green belt.

Andre shares a lot of memories from this pre-adolescent time, but settles on one of them as his favorite—working for his step-dad in his Greek Delicatessen. “I loved the freedom…the way people treated me like a grown-up.”

Although a lot of his fitness training came in the form of scrappy fights and running from trouble, Andre did become a star athlete—lettering in four sports and earning a football scholarship to NC State. The place between college and prison is where the details fall out. But, I don’t press. Sometimes the details are where the entire story lies. Sometimes they are nearly insignificant.

On December 3, 1993 Andre converted to Islam. He went all in, memorizing the Quran, even teaching the religion and the language to his fellow inmates. “What do you like about Islam?” I ask him. “The directions are clear. The history doesn’t change. It gives you guidelines.” I tell him that sounds a lot like prison. He tells me some people do better with structure.

When I first met Andre, a few days before now, he was sitting by the window with a Bible on his lap. He said we’ve got to read all the stories and read them again. Make sure we read them right. Remind ourselves of parts we’ve forgotten.

As much as Andre is pouring over sacred text, I think he’s sitting with some of his own too—turning pages of his rough and tumble childhood, reading through lines he’s highlighted and whole chapters he’s marked through. I think he’s looking at the collective body of work that has brought him this far and all the future drafts to come. I think Haywood Street Respite is his pause before a prolific time of becoming.