MENUCLOSE
Blessed to be a blessing 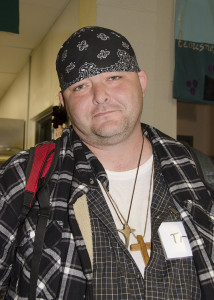 Welcome home Trai (pronounced Try). We are grateful that you have come home to Asheville and Haywood Street Congregation! Returning from a long visit with family and friends in Tennessee, once again Trai has come back where he feels God is calling him to ministry.Trai grew up in the woods of East Tennessee where he played with eleven cousins and ate dinner every Sunday with his family at his grandmothers house! He remembers those happy childhood days fondly.He says his life took a wrong turn when he became a rebellious teenager. At age fourteen he got involved with alcohol/drugs and wanted to become a gang member.After some rough years, at thirty-two, Trai met a young man in Gatlinburg who was carrying a cross from Mississippi to Washington D.C. After spending several days together, Trai felt God calling him to a new life. Growing up he had no knowledge or understanding of Jesus, and in those days he believed in Paganism and Reincarnation. But somehow this call was different. He believed it to be a call from the Holy Spirit.  Powerful.Trai left Tennessee with two sets of clothes and his now most important possession, his Bible. He hitched a ride and landed in Asheville. (We are grateful for that!)Trai has struggled with “seeing and hearing demons…they look like Freddie Kreuger.” He believes they are battles “between Jesus and the devil.” He has been diagnosed with Paranoid Schizophrenia and now takes medication regularly. To help fight his battle with this ailment, he has become what he calls a Prayer Warrior, praying for himself and others to be freed from these difficult experiences. (Find him every Wednesday in the Haywood Street Prayer Room, where he is a Prayer Minister). He now senses the peace of Jesus in and around him.He knows that Asheville is where God has brought him to minister to others by telling his story of Truth – that God is victorious in his battle with the Dark Side. You will find him on the streets, at Pritchard Park, and anywhere God leads him to help people know about Jesus.Ask Trai how he is doing on any given day and his proclamation will be the same every time:  “I AM BLESSED!” And SO he is! God has blessed him so he will BE a blessing! And SO he is! WELCOME HOME, TRAI!