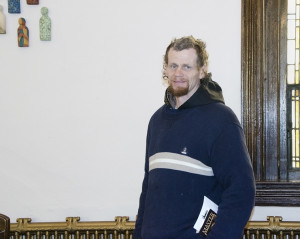 …from a Respite interview by Barbara Bates Smith

“Sure, I’ll tell her my story,” Donny replies to Jody from his Respite room, where he’s recovering from two stab wounds in his chest, puncturing a lung. Jody indicates a spot by the window at the end of the hall where Donnie and I can sit and talk. And my wish to “get stories” at Haywood Street Congregation is richly rewarded as this self-declared “Hillbilly Hippie Rebel” unravels his forty-nine years in a steady stream of memories.

There were those rough early years in Louisville, Kentucky– years of abuse, foster homes, group homes, getting kicked out of school. He chuckles about being the “class clown” in these school years, demonstrating every intricate detail of making a dart– with straight pin, pencil eraser, and scotch tape– with which he’s able to quickly dispense to his teacher’s turned-away backside. Big laugh from the class, all right, but one class member rats on him, and he’s expelled. Seems he’s still applying for his degree from “the school of hard knocks,” as he calls it.

Some more hard knocks have led this rebel, who often thought he “knew it all,” to six penitentiary terms before it’s over. (Whew! I’m wondering: where do we go from here?)

In a flash he turns to brighter topics like his love of the Bob Seger song, “Turn the Page.” It had once become a personal theme of his.
In his 40’s, headed out of a stint of years in Evansville, Indiana, he catches a ride which eventually drops him in Asheville, into what’s looking like a new chapter of his life… Well, a few more hard knocks, but only one assault charge, he boasts (after pissing in an alley, challenging his accuser to “get out of his face”… and, well, a 911 call landing him in jail.)

He meets his wife-to-be, Raven, who offers her camp as a place to stay following a series of misadventures (one blamed on Wild Turkey, he admits) at A-Hope, at the Alcohol and Drug Abuse Treatment Center in Black Mountain, at a “first step farm” he’d heard about while in Mission Hospital’s de-tox unit. He and Raven “Occupy Asheville” together in a tent at the Civic Center. They have two marriage ceremonies: one at Edible Gardens with Brian Combs as best man, a second at Haywood Street with Pastor Brian officiating. Donnie and Raven have signed up to become members of Haywood Street Congregation.

Oh, about the stab wounds. Well, they were the result of an argument with another camper. Donny sounds almost mellow as he admits they were both drunk. (Here I learn about drinks called “sidewalk slams.”) His attacker is in jail now; Donny will tell the prosecutor to ease up on him.  He says, “I try to help people when I can. I know how it feels.” And he is pleased to say he has not had a drink in the ten days since that attack, that life is better and he hopes it sticks. He is grateful there’s a Haywood Street Respite to make this recovery possible. (I’m remembering that theme song about “turning the page,” hoping it’s prophetic.)

At this point he turns away to knock on the window, seeing his wife Raven walking by on the sidewalk below, proudly pointing her out to me. They blow kisses, exchange warm “I love you’s.” He yells, “I’ll see you at 5.”

A good time for me to exit. (And to thank God for Respite.)