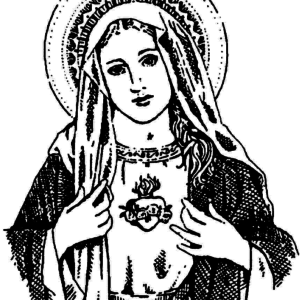 400 years ago, after King James refused to reform the Church, English Puritans sailed for the new world.  When they landed in Massachusetts, their mission was clear: purify all that was wrong with Roman Catholicism, indoctrinate the colonies and evangelize their version of Christianity.  Centuries later, the influence of those early Puritans remains. Pro-morality and anti-celebration, a strong work ethic and a manifest destiny, and a deep suspicion of Mother Mary.

Because of Catholic distrust, most Protestants, then and now, have entirely missed the appropriate veneration of Mary as the matriarch of our faith.  But every Advent season, Baptists, Presbyterians, Lutherans, Episcopalians, United Methodists and all the rest encounter her again on the way to Bethlehem.

If we want to reclaim the mother of the holy family, then we can start by asking, why is Mary a model of faithfulness?

Luke 1:26-38 In the sixth month the angel Gabriel was sent by God to a town in Galilee called Nazareth, to a virgin engaged to a man whose name was Joseph, of the house of David. The virgin’s name was Mary. And he came to her and said, “Greetings, favored one! The Lord is with you.” But she was much perplexed by his words and pondered what sort of greeting this might be. The angel said to her, “Do not be afraid, Mary, for you have found favor with God. And now, you will conceive in your womb and bear a son, and you will name him Jesus. He will be great, and will be called the Son of the Most High, and the Lord God will give to him the throne of his ancestor David. He will reign over the house of Jacob forever, and of his kingdom there will be no end.” Mary said to the angel, “How can this be, since I am a virgin?” The angel said to her, “The Holy Spirit will come upon you, and the power of the Most High will overshadow you; therefore the child to be born will be holy; he will be called Son of God. And now, your relative Elizabeth in her old age has also conceived a son; and this is the sixth month for her who was said to be barren. For nothing will be impossible with God.” Then Mary said, “Here am I, the servant of the Lord; let it be with me according to your word.” Then the angel departed from her.

Congregational Responses:
Her pregnancy could lead to being stoned legally for adultery.
She said yes to God without any answers.
She believed in the impossible that was happening inside her.

Last year I became a father.  On the Monday morning of our scheduled C-section, we gathered at the hospital.  After taking my wife to prepare her for surgery, 45 minutes later, a nurse came and got me.  Instead of offering a word of wisdom from her years of experience, we walked in silence down a number of disorienting hallways and then arrived at the operating room.  Inside, the industrial lighting was blinding, the emergency cart for the NICU was waiting, and the two-dozen nurses and doctors barely noticed my arrival.  And then there was my wife, Peyton, stretched out on the table, her abdomen splayed open from the surgeon’s scalpel.  A few tugs later, I was introduced to my daughter for the first time.  The anesthesiologist congratulated me on becoming a daddy, but I was even more overwhelmed with already being a husband.  To be in partnership with a woman who endured the raging hormones and sleepless nights of pregnancy, who sacrificed her physical mobility and social freedoms, who gave her bone, breath and blood to the sacred task of beginning our family.  At the bedside, I looked at her in a way I’ve never looked at another human being, realizing I didn’t understand the fullness of love until that moment. On June 13th, at 10:24 am, all I could do was cry and cry and cry in awe and appreciation of the woman I married.

Regrettably, outside of labor and delivery, we live in a culture that denigrates the body rather than respects and reveres it. Flesh is inherently suspect, never to be trusted because of its carnal desires.  Our dirty container is just a perishable shell obscuring the true light of our souls deep within.  To escape the body on earth is to finally be set free for joyful service in heaven.

While that may be the story of society, it’s not the story of scripture. In the fullness of time, the Bible says, God decided to take up residence in the human condition, and of all the ways to dwell among us, God chose to show up wearing skin.  It should be obvious then, that if bodies are good enough for God, then they should be more than good enough for God’s people.

What most Catholics already know, many Protestants don’t yet understand, that Mary is a model of faithfulness because the Immaculate Conception only happens if she invites Jesus to live and grown inside her womb.

Since that first pregnancy when Mary agreed to be a God bearer, the arrival of Christmas has depended on all of us choosing to be surrogates.  So the next time the angel Gabriel taps you on the shoulder, be reminded that there is no barrenness in the kingdom, that all of us are invited to be mothers giving birth to love incarnate, that our bodies are intended for your holy purposes.