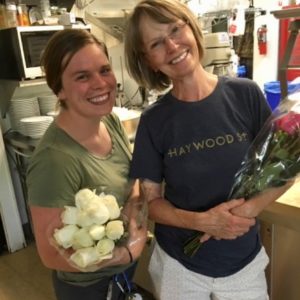 When it became official that Haywood St. UMC would merge with Central UMC, I had been told that the desire of their membership was that the building be used for outreach of some kind. Looking back to that time, it is so clear that God had plans to use the space for that very thing.  I think the reason that memory has stayed with me is because the outreach has gone so much further than anyone could have ever dreamed.

In January of 2013,  Dave Holland, the chef at Haywood St., happened to mention that it would be nice if we had someone who could offer haircuts.  I mentioned that I had cut my boys’ hair when they were young and that I still cut Steve’s hair even now.  Suddenly I was “hired” for the job!  No real experience, just a willingness to offer my clippers, scissors and eye for symmetry! At the next opportunity, I carried in my stool and tools and set up shop in the dining room, on the stage area.  I timidly asked one table of men if any of them would like a haircut and suddenly they were lining up!  I jokingly offered a disclaimer that I was not professionally trained, but that didn’t matter.  For the next 3 hours I cut hair, laughed, listened to stories, and was thanked…always thanked!  Soon another volunteer said she had the same training/qualifications as me, so the next week Sharon LeDuc joined me on the stage.  We have since moved our ‘salon’ into the room adjoining the dining room, added several more barbers/beauticians and a sign up sheet and have been in business ever since.  Most people were OK with Sharon or me for those first few years.  Thankfully, though, we added Joanne Kowaluk who is a professional and a real asset to our team.  Several others saw an opportunity to offer their skills to help and because of all that dedication, we are almost to the 10,000 haircuts in 6 years.

This, of course, is only one example of the outreach and growth that has happened in the last decade.

To me, change (as it applies to Haywood St.)  means growth.  Growth to include so many people from all walks of life that are in need of something that speaks to their soul in a way that nothing else does. It’s a stepping out and into that “Holy Chaos” that surely is similar to what it was like in Jesus’ day.

I want to experience worship as, I think, it was intended to be.  Come as you are and sleep in the pew if you’ve had an especially sleepless night. Nobody will judge you and will actually be happy you found a place where you can feel safe enough to do that.  You are also given a chance to make your concerns known and your views expressed.  The beauty is that everyone is on the same level in wanting and needing support wherever you are in your life’s journey.

I expect Haywood Street Congregation to grow and expand in its mission to even more people. This will be especially evident with the addition of the Fresco in the sanctuary.  There is no doubt that project will draw people expecting to see beautiful art, but who will also be introduced to the mission of Haywood St. Congregation through its interpretation.