MENUCLOSE
Healing for both body and soul at Respite… 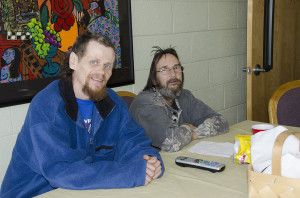 We caught Donny and David enjoying snacks and watching a basketball game on tv when we visited briefly today in our new Respite facility. Donny wants everyone to know he’s ‘back,’ though still recovering from the two stab wounds to the chest he suffered a couple of weeks ago. Still very pale and quite weak, he says it will take a while, but he hopes to be out and about soon. He said he is receiving lots of TLC at Respite, and is thankful to have this care and a roof over his head while he gets his strength back. When he is discharged, he plans to go back to his tent, as right now he and his wife, Raven, have nowhere else to go.

We talked for a bit about the man who stabbed him, whom Donny says he has already forgiven. “It was a friend, a Viet Nam vet, who didn’t know what he was doing ’cause we were both drunk,” according to Donny. He plans to go to court when the man’s case is heard, to ask the judge not to sentence him to more time than he has already served. In Donny’s words, “Jesus Christ has forgiven me, so why should I not also forgive my friend?”