MENUCLOSE
Companion Corner – Kaki Daniel
How long have you been a part of this community? 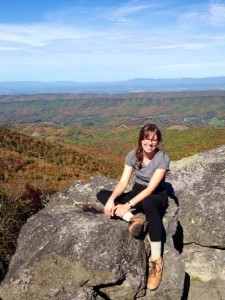 I started coming when the group home that I worked for at the time started coming on Tuesday nights to help out with getting the meal ready and setting tables. That was, I think, October of 2013.

Why are you a companion? Why are you here?
I come because I feel cared for when I’m at Haywood Street. After the camping trip to Virginia last October, I realized how much everyone meant to me, even if they weren’t able to come camping with us. Jerry was my “Secret Friend” (like Secret Santa) so I had to pick out an item to give to him at the end of the trip. I thought a lot about what to pick up for him because I just assumed that we were so different. In the end, I couldn’t think of anything, except to give him a hug. So I gave Jerry a hug and it opened a whole new world to me.

Where do you help serve and how are you involved with Haywood Street?
I come mostly to hang out at Respite now. With school, I can’t always make it to lunch on Wednesdays, but when I can, I do and eat lunch with my friends. I have been helping with the Trader Joe’s tuns, taking people to appointments from Respite, and sometimes Tuesday night clean-up too.

Is there a story you would share about your experience?
Well, I don’t think I would have ever been in a Thanksgiving Parade if it weren’t for Haywood Street. I feel like being a part of the family here has helped me grow so much. I’m much less likely to judge someone based on appearances and to see them as a brother or sister. I’ve realized that when a person feels safe, loved, and helpful they are much more likely to show you who they really are, not the person who was hungry, scared, and alone.

What is one of your favorite things to do when you’re not here?
I love to make things. Knitting, crocheting, or cooking.

What would you tell other people who don’t know about Haywood Street?
I would tell them that it’s perfectly fine to just come to hang out. Make some new friends, tell some bad jokes, and eat as much as you want!

Pictured above: Kaki on the Wilderness Trail with Haywood Street!