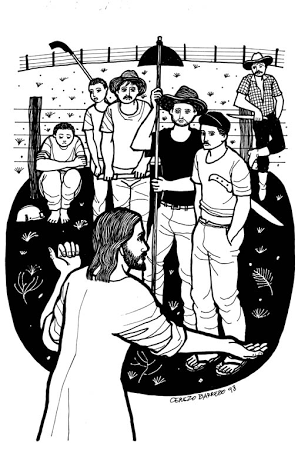 The Church long ago converted to the business model of ministry.  Instead of walking the streets to meet your neighbors, a demographic study is conducted; instead of the Spirit’s movement, a 7-step strategy is followed; instead of the pastor’s study, now a C.E.O.’s glassy corner office.  The intention then for many congregations becomes less about making a disciple and more about increasing a dividend.

It may have started with Peter, James and John and the other senior managers checking the employment manual on career advancement.  Section 3, paragraph 7.2 on getting ahead says: show up early to the job site and occasionally stay late off the clock, work hard and at the end of the year a raise and a promotion will be yours.

Matthew 20:1-16 “For the kingdom of heaven is like a landowner who went out early in the morning to hire laborers for his vineyard. After agreeing with the laborers for the usual daily wage, he sent them into his vineyard. When he went out about nine o’clock, he saw others standing idle in the marketplace; and he said to them, ‘You also go into the vineyard, and I will pay you whatever is right.’ So they went. When he went out again about noon and about three o’clock, he did the same. And about five o’clock he went out and found others standing around; and he said to them, ‘Why are you standing here idle all day?’ They said to him, ‘Because no one has hired us.’ He said to them, ‘You also go into the vineyard.’ When evening came, the owner of the vineyard said to his manager, ‘Call the laborers and give them their pay, beginning with the last and then going to the first.’ When those hired about five o’clock came, each of them received the usual daily wage. Now when the first came, they thought they would receive more; but each of them also received the usual daily wage. And when they received it, they grumbled against the landowner, saying, ‘These last worked only one hour, and you have made them equal to us who have borne the burden of the day and the scorching heat.’ But he replied to one of them, ‘Friend, I am doing you no wrong; did you not agree with me for the usual daily wage? Take what belongs to you and go; I choose to give to this last the same as I give to you. Am I not allowed to do what I choose with what belongs to me? Or are you envious because I am generous?’ So the last will be first, and the first will be last.”

Congregational Responses:
The disciples put their own interests before celebrating someone else’s good fortune.
Discipleship for the disciples had been reduced to a payout.
They felt cheated.

Many career Christians make a deal early on with God: if I have perfect attendance at Sunday School, if I memorize the creed and recite the affirmation of faith, if I abstain from this and keep my nose clean from that, if I spend my lifetime laboring in the fields of ministry, then at quitting time, you, O’ God, will remember the sweat of my brow and the ache of my back, and reward my hard earned efforts. When evening came, however, and the payroll office started cutting checks, and the disciples were left with their wallets open grumbling in protest.  Why?

Because they were made equal.  But I thought my self-worth was determined by my job performance.  No, God’s kingdom doesn’t follow a flow chart of hierarchy where personnel at the bottom of the pyramid are less than.  You were all created good before you clocked in.

Because the employee manual from corporate didn’t apply to the vineyard.   But it clearly states that a raise and a promotion are promised at the end of an honest day’s work.  No, the Empire and the Kingdom are easily confused.  Go back and reread the cautionary chapters in the Gospel on work’s righteousness.

The disciples were protesting loudest because God is a lousy businessperson constantly restructuring management by planting in rocky soil and chasing lost sheep and welcoming prodigal sons and taking on late arriving laborers the world has refused to hire.  But I showed up early and therefore should be first.  No, it’s the Johnny-come-latelys who get to break in line.

For the original disciples and those of us who are Church insiders, the stories of Jesus only become parables if someone ends up getting offended.  And he’s trying to offend those of us who believe that Christianity is ultimately another profitable business deal.

But hear the Good News, it’s harvest time, and God has left for town again with an empty farm truck, driving around until every unemployed laborer has been picked up.  And when they return, we get to choose: bemoan our insulted sense of fairness or celebrate their surprising blessing of grace.