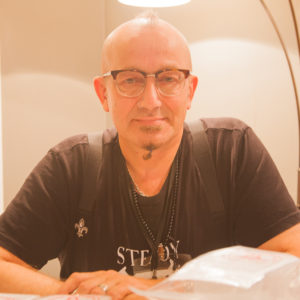 It’s been a long day and I’m headed home. I peek into the office of Steady Collective on my way out. Michel is counting the number of clean needles he has provided to users today. I don’t want to interrupt because the numbers are creeping over 1,000 and I’d hate for him to have to start over.

I had decided a while ago that Michel is a cool dude. He’s got cool piercings, cool tattoos, cool suspenders, and a cool French accent. He’s got a timelessness that puts him somewhere in the age range of 35-55. I’m not sure if it’s a European vibe or a Haywood Street vibe, but I feel warmly invited to take a seat. I wait until the counting is done. “….one thousand twenty-five, one thousand twenty-six.”

I tell Michel I don’t want to hold him up, but I sure would love to hear his story someday. “How about now?” I take a quick look at the time, decide everything on my agenda can wait and settle in.

Michel starts his story at age 11…in France…with cigarettes. He makes a quick leap to 17 when he became a professional musician and then an even quicker leap to 20 when he became a professional heroin addict. “Why heroin?” I ask him bluntly. “Why?” “Yea. Why?” “Because I loved it. Because it puts you in a bubble. Because it feels like going back in your mother’s belly.”

Over the next half hour, I feverishly take notes on an intense odyssey through the world of drugs—cocaine, ecstasy, alcohol, acid. There’s music and school and marriage sprinkled throughout. There’s also divorce. Since this is the only part of the story I can relate to, I extend my grievances and say something like, “Awe, I’m so sorry, I’ve been there.” Michel looks up at me with a grin that simultaneously acknowledges my outreach and also says amateur.  “Four,” he says. “You win,” I say. “Continue.”

By forty-five, Michel tells me, he was suicidal. Really, he had stopped getting high decades ago and had been living alongside a steadily increasing tolerance level ever since. He describes the desperate moment he asked for help, praying to Buddha, begging to Buddha. He got in his car, not knowing where he was going, but going with the clarity and speed of someone who does. Miraculously, he ended up at an NA meeting in Kenilworth.

I pause and roll my wrist around a bit. We’ve gotten to the part where Michel starts to sober up so I’m assuming we’re at the part where life gets better and all the pieces fall into place. I look at the sheet of paper I have now filled to completion. Michel motions for me to turn the page and in his still cool way (and still cool accent) says, “Now this is where it gets weird.”

In 1997, Michel had been diagnosed with what was then termed Hepatitis Non-A Non-B, and would later be known as Hepatitis C. By 2011, Michel’s health was quickly deteriorating and he was diagnosed with stage 4 Cirrhosis of the liver. He takes out an old driver’s license and hands it to me. It’s a shocking image. I assume that’s precisely why he has chosen to keep it.

Michel’s doctors determined he was too sick for Hep-C treatment; that he needed a liver transplant first. In 2013, Michel’s new liver came by way of a 17-year-old. The operation was a success, until it wasn’t, and Michel went into kidney failure.

I’m sitting two feet from Michel so technically I know what he chooses, but I’m still on the edge of my seat. “So I jump on the trolley,” he says. “And I wake up. And the doctors say all my numbers are better and I get accepted into two clinical trials and I’m cured.” “You’re cured of the Cirrhosis?” I ask. “And the Hepatitis.” “Everything?!” “Everything.”

Michel goes on, “So then the question became, ‘What am I going to do?’” He began volunteering at WNCAP, became a support specialist, a recovery coach and an integral member of a number of boards. Eventually, he found his way to Steady Collective which is where I find him today…at a desk, beneath a lamp, faithfully counting clean needles.

To me, Michel embodies what is so quintessentially Haywood Street. He sees what is dark and moves towards it. He hears the calls from the margins and he listens. He keeps a plan. He keeps it loose. He decides ‘being with’ holds greater power than ‘doing for’. His work is not glamorous. It is steady.

I gather my belongings, thank my new friend and head for the door. “Now I’ll need your story,” Michel says. “Yea…I turned my homework in late one time,” I say. “That’s as hardcore as it gets.”