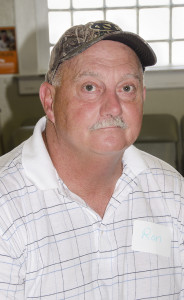 When Ron came to Asheville over three months ago from Columbia, S.C., he was not a happy man.  He will be the first to tell you that he did not know where to go or what to do.  He was alone and very sad.  He longed for “home” but could not find it.  He thought of leaving Asheville, but had no inkling which way to go.  Ron was grieving the death of his wife and his beloved dog, Dockie.  A chef by trade, he could have found a job pretty easily, but he was not motivated to do anything, he says.  The grief hung around him like a leaden overcoat.

He began coming to the Welcome Table at Haywood Street Congregation every Wednesday.  He sat alone in the waiting area each time.  The hurt and emotional pain around him was almost palpable.

But that was then.  How things change when we encounter the Living Christ!

Ron was in a downtown park when a man came over to share the Gospel with him.  Dan, a former doctor, kept showing up to talk with Ron.  Over and over he came.  Ron says that he saw something different in Dan’s eyes, different from all the other street preachers.  He believed that Dan was truly a man of God, sincere in His beliefs.  After praying about it, Ron felt that Jesus was calling him to go with Dan to share the Good News.  Now they travel around Asheville together six days a week.

The first healing he witnessed was his own!  Dan laid hands on him and prayed over Ron’s knee.  Now he walks without pain!  He counts eleven healings that he has witnessed.  He makes sure that everyone knows that Jesus is the Healer, and he and Dan are only the instruments that God works through.

Fifty years ago, a preacher told Ron that he would some day do “something special” for Jesus.  He did not believe it then, but he believes now!

If you have an opportunity to speak with Ron, you will not find a sad, lonely man wondering where to go or what to do.  You will find a man of God on a mission, following in the footsteps of Jesus.  You will find a man who believes he has found “HOME.”  Just where God wants him to be.  Welcome home, friend!

THANKS BE TO GOD!