MENUCLOSE
The Spirituality of Unskilled Labor

The Spirituality of Unskilled Labor 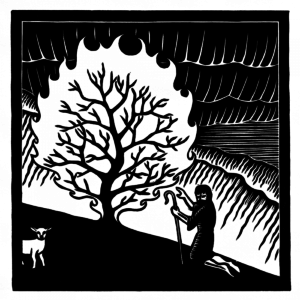 Even as irreverent as our society has become, many people still claim to be experts on how to meet God: it will require ascending the most legendary peak before the heavens tear open.  It will require a radical cleansing of soul and spirit until you’re pure in thought and action. It will require season after season of spiritual discipline, a sole focus on nothing else.

Thousands of years before, Moses didn’t claim to be an expert on anything.  He was just trying to keep his head down while staying put in Midian.  And then, out past the wilderness with his flock, Moses turned to see the burning bush.  So what then does Moses teach us about encountering God?

Exodus 3:1-5 Moses was keeping the flock of his father-in-law Jethro, the priest of Midian; he led his flock beyond the wilderness, and came to Horeb, the mountain of God. There the angel of the Lord appeared to him in a flame of fire out of a bush; he looked, and the bush was blazing, yet it was not consumed. Then Moses said, “I must turn aside and look at this great sight, and see why the bush is not burned up.” When the Lord saw that he had turned aside to see, God called to him out of the bush, “Moses, Moses!” And he said, “Here I am.” Then he said, “Come no closer! Remove the sandals from your feet, for the place on which you are standing is holy ground.”

Congregational Responses:
By asking Moses to remove his sandals, God wants to eliminate all boundaries.
God doesn’t come to us on gilded thrones but instead in small, non-descript things.
Moses was awake enough to see the God beside him.

After an injury in the Thirty Years’ War, Nicolas Herman joined a Carmelite monastery in Paris and took the name Brother Lawrence.  He wasn’t educated, so couldn’t be a clergyman; he wasn’t especially talented, so he accepted being a humble layman; he wasn’t front of the house material, so he was assigned to back of the house kitchen duty.  There, for the rest of his life, he quietly served God with an apron on scrubbing and cleaning.  After his death in relative obscurity in 1691, Brother Lawrence’s written reflections were collected and published.  In them, he recorded his life’s most profound discovery: the spirituality of unskilled labor. That God is there for the noticing on the dirty floor to be swept; God is there for the noticing in pile of dishes to be washed. For practicing the presence of God in domestic life, Brother Lawrence has become a saint to ordinary people who live ordinary lives who perform ordinary tasks.

Moses was God’s ordinary prophet, a tongued tied speaker and reluctant leader who ended up modeling for the world how to turn and recognize the One who’s forever showing up.  Because of his witness, we are taught so much about encountering God:

God’s presence takes up residence in the insignificant.  Horeb was considered a wasteland of a mountain; the bush was a common scrub plant; the dirt under Moses’ feet was nothing more than desert sand.  God has a habit of making sacred that, which has been dismissed as secular.

God’s presence isn’t reserved for the perfect.  Moses was an outlaw wanted for homicide.  He was on the run, covering his tracks in a foreign land.  The revelation of God comes to us where we are, not where we think we ought to be after we’ve sobered up or cleared our record or gotten it right.

God’s presence happens when we’re doing something else.  Moses wasn’t sitting quietly in the pews at church; he wasn’t feverously praying at the altar; he wasn’t offering a tenth of his income.  He was likely mending fences, and protecting against predators and leading his sheep to water.  He was doing what he does, being a shepherd.

Believing that every menial task may very well be the holiest activity of our day, we are called to be especially reverent when we are taking out the trash or doing the laundry, packing up the tent or folding the tarp, cutting the grass or raking the leaves, brushing our teeth or cutting our toenails, emptying the ashtray or filling up the water bottle, duck taping the shoe or flying the sign.  Whatever the chore, as you go about your day-to-day, be reminded of Elizabeth Barrett Browning’s poem,

“Earth’s crammed with heaven,
And every common bush afire with God,
But only he who sees takes off his shoes;
The rest sit round and pluck blackberries.”