MENUCLOSE
The Apocalypse of Today

The Apocalypse of Today 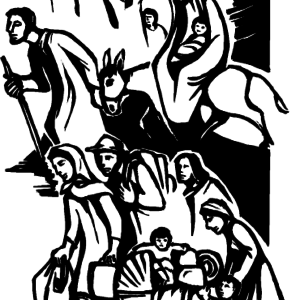 Matthew is by far the most caustic Gospel. The author’s language is cutting, his tone is strident, his message often menacing. Towards the end of his account, he gives voice to a Jesus who condemns the rich man, curses the fig tree, throws out the wedding guest, predicts the destruction of the temple and renders guilt verdicts to friend and foe alike.

By chapter 24, Matthew is in no mood to participate in the cheerful nativity scene being perfectly arranged out on the front lawn.  Instead of beginning Advent, the four weeks between now and Christmas, with season’s greetings, he begins with judgment.

In today’s text, why is Matthew’s Jesus so judgmental?

In his novel “Lion Country,” Fredrick Buechner writes about a mother on her deathbed named Miriam.  Miriam is concerned about leaving behind her two sons to be raised by her ex-husband Charlie.  So she calls in her brother Tono.  About her ex, Miriam says to her brother, “the man’s a bleeding ghost. You know what I mean when I say he sleeps most of the time.  I mean he often doesn’t get up til noon.  And when he naps, he doesn’t just nap when its raining or something like that but right in the middle of a sunny afternoon for God’s sake with the kids and me running around in bathing suits right under his window.  Sleep is his escape from life Tono.  Someday they’ll have to come, wake him up, and tell him he’s dead.”

There are lots of reasons we fall asleep, especially this time of year: the holiday music that starts earlier and earlier, lulling us into a stupor with the warm promises of sentimentality.  The glut of consumerism, standing in line at big box stores and clicking on discounted Internet deals until we collapse on a pile of yet to be wrapped gifts.  The raised glasses of Eggnog, toast after toast after toast that leave us in an inebriated oblivion.

But when we choose to shut the bedroom door of our lives and snooze through an easily dismissed God showing up in our midst, that’s when Jesus is at his most judgmental.

The word Advent means, “coming.” The First Coming was God born in a manger, the love of heaven come to earth wrapped in diapers.  The Second Coming will be the triumphant return when all will be made well, when the creation God started is finally and fully recreated.  But if faith is what we notice “in between times” (Barth), then Dec. 25thtwo thousand years ago and some future revelation aren’t our highest holy days.

Today, instead, is the day that should be first circled on every Christian calendar. Just one chapter later, Matthew tells us that God is coming among us today as a starving child, today as a thirsty woman, today as a naked man, today as an unwelcome stranger, today as a sick patient, and today as an imprisoned felon.  And what the Gospel asks most of us is to be alert and awake enough to notice.  So if Christmas is where you’re planning to end your Advent, then know the only way to begin is with your eyes wide open.