If it is true that we all project onto Jesus our own sensibilities, then, in the South, Jesus drinks sweet tea, watches college football on Saturdays, wears a seersucker suit before Labor Day, and says “yes ma’am.”  Below the Mason-Dixon line, being polite is our most valued value. 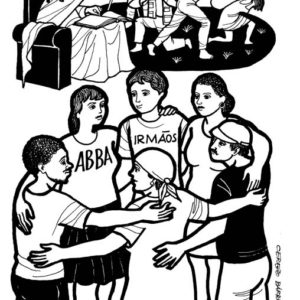 But in Matthew, Jesus isn’t a yes man, has something to say and isn’t afraid to say it.  His role in the Gospel isn’t to be nice, but rather to tell the truth.  In this final section of teachings before his death, he calls out the Sunday school teachers, the Bible professors, the pious clerics, the zealots of the Law, and even his own followers.  So, the question for us to answer together is, what’s Jesus criticizing?

Matthew 23:1-12 Then Jesus said to the crowds and to his disciples, “The scribes and the Pharisees sit on Moses’ seat; therefore, do whatever they teach you and follow it; but do not do as they do, for they do not practice what they teach. They tie up heavy burdens, hard to bear, and lay them on the shoulders of others; but they themselves are unwilling to lift a finger to move them. They do all their deeds to be seen by others; for they make their phylacteries broad and their fringes long. They love to have the place of honor at banquets and the best seats in the synagogues, and to be greeted with respect in the marketplaces, and to have people call them rabbi. But you are not to be called rabbi, for you have one teacher, and you are all students. And call no one your father on earth, for you have one Father—the one in heaven. Nor are you to be called instructors, for you have one instructor, the Messiah. The greatest among you will be your servant. All who exalt themselves will be humbled, and all who humble themselves will be exalted.

Congregational Responses:
Churches that preach, “do as I say but not as I do.”
Religious leaders only doing their jobs for the public praise.
People forgetting that discipleship requires serving others.

Like many of my classmates, to graduate from seminary and become ordained, I was required to take a course in preaching.  There was a lot to learn: only say what you need to say and then sit down; don’t work out your unresolved issues from therapy in the pulpit; preach what the text says, not what’s convenient to hear; the Spirit usually shows up on the other side of your preparation; find the most encouraging eyes in the room and just have a conversation with that one person.  Intimidated by the absurdity of the task, attempting to speak a word on God’s behalf, I spent the semester listening to many of the great preachers in Atlanta.  After one service at a Lutheran church, I went up to the priest, introduced myself and asked for his advice.  He said, “Don’t ever forget the most important rule in preaching: never use the sermon to make yourself look good.”

Regrettably, like the scribes and Pharisees, many clergy types don’t take that advice.  The reason they got into ministry is not the reason they stay in ministry.  Riding on a donkey gets replaced with a car allowance and a parking space for the pastor; waiting with the last in line gets replaced with a standing reservation at the 5 star restaurant; being dismissed as a servant gets replaced with being exalted as the Very Right Reverend.  And if that seduction happens long enough, then faith becomes little more than a Christian charade, a deed performed only while people are watching.

What Jesus is criticizing most are religious leaders who hustle in his name.  Hustlers don’t just work in brothels wearing fur, hustlers don’t just work in the halls of government wearing a suit, hustlers also work in churches wearing fancy clergy robes and beautiful stoles. Hustlers ultimately only hustle to fill their bank accounts, to inflate their reputations, to indulge in their vainglories.

So if you’re new to faith or old to the profession and you’ve gotten the order of things confused like we all do- God first, others second, me, myself and I last- then hear the truth of the Good News.  Jesus didn’t show up to slap us on the back or exchange Southern pleasantries, he came instead to save us from our impure intentions, our mixed motivations, and our hypocritical habits.

He came to set us free from ourselves.