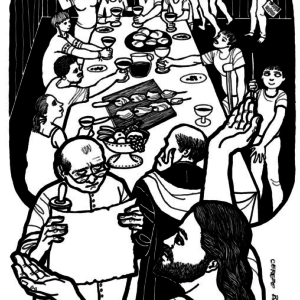 If you’ve ever thrown a party, then you know that moment of utter vulnerability fifteen minutes before the festivities are scheduled to start.  The guest list has been carefully prepared; the handwritten invitations went out weeks in advance; the matching decorations have been hung; the drinks are on ice and the food is in the warmer; and then the possibility occurs to you that no one might show up.

In today’s parable, an allegory utilizing hyperbole to make a point, God is anxiously checking the clock and staring out the window, pacing back and forth in the fellowship hall, waiting for his son’s wedding banquet to start.  When his worst fears are realized, he gets, understandably, angry.

In addition to his invited guests no-showing, what’s God upset about?

Matthew 22:1-14 Once more Jesus spoke to them in parables, saying: “The kingdom of heaven may be compared to a king who gave a wedding banquet for his son. He sent his slaves to call those who had been invited to the wedding banquet, but they would not come. Again he sent other slaves, saying, ‘Tell those who have been invited: Look, I have prepared my dinner, my oxen and my fat calves have been slaughtered, and everything is ready; come to the wedding banquet.’ But they made light of it and went away, one to his farm, another to his business, while the rest seized his slaves, mistreated them, and killed them. The king was enraged. He sent his troops, destroyed those murderers, and burned their city. Then he said to his slaves, ‘The wedding is ready, but those invited were not worthy. Go therefore into the main streets, and invite everyone you find to the wedding banquet.’ Those slaves went out into the streets and gathered all whom they found, both good and bad; so the wedding hall was filled with guests. “But when the king came in to see the guests, he noticed a man there who was not wearing a wedding robe, and he said to him, ‘Friend, how did you get in here without a wedding robe?’ And he was speechless. Then the king said to the attendants, ‘Bind him hand and foot, and throw him into the outer darkness, where there will be weeping and gnashing of teeth.’ For many are called, but few are chosen.”

Congregational Responses:
The guy without the robe not responding.
Not taking the invitation seriously.
God gave his very best and the invited guests responded with their very worst.

In the Aegean Sea off the northern coast of Greece, sits Mt. Athos.  It is a peninsula where the spiritual capital of Orthodox Christianity is located, a remote place populated only by monasteries and monks.  Many seekers have come in search of meaning for over a thousand years, believing it is the most sacred place on earth.  A seeker, the story goes, showed up on Mt. Athos and asked one of the monks for help finding God.  For three days they sat together, the monk listening and the seeker talking.  The seeker had stories to tell, pieces of advice to share, opinions to argue.  After thirty-six hours, the monk began to pour the seeker a cup of tea.  He did not stop at half a cup, or a full cup, but kept pouring until the tea was spilling all over.  Finally, the seeker screamed, “Stop! Can’t you see the cup is full?”  The monk replied, “So are you. Until you empty yourself, there won’t be any room in your heart to find God.”

Very few of us are against disciplines of the heart, or hostile towards rituals of meaning, or militant in our atheism, but instead just too preoccupied doing other stuff.  And that’s what’s so upsetting for the father who threw a party for his son.  That we are too busy to even show up.  Sorry God, this is an inconvenient time to share a meal, or join the festivities, or be the family of faith.

After an awkwardly silence up there with the minister, Jesus must have realized that he had been left at the altar and that this wasn’t his day to get married.  So he likely cleaned up the mess, returned his rented tuxedo and started doing the thing he’s always done: writing out yet another guest list.

So when the invitation arrives, handwritten on your heart and addressed just to you, the choice is yours to joyfully accept or respectfully decline.  But before you decide, please remember that the most important moments in life are often, regrettably, the ones we miss.