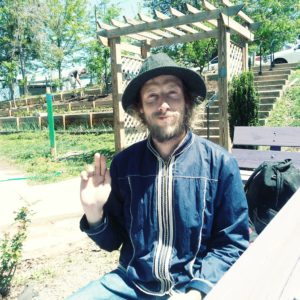 The only problem with joining in on the Welcome Table meals is that my
heart and belly end up so full that the desire to nap becomes a bit overwhelming. In an effort to shake another lunchtime stupor, I’ve come outside for a walk around the gardens. It’s a beautiful end-of-April day and our friend, Angel, has found the perfect spot to soak up some sun.

I first met Angel at Haywood Street’s Story Circle. He’s got a real sweetness to him, and often, a good looking fedora—which I’ve unofficially declared to be a sign of high intelligence and grace. All I have to do is ask Angel for some good news and he jumps to rummaging through his backpack, pulling out a series of papers and laying them all out on the picnic table. There’s this recent Citizen Times article which, in print, features his image on the front page. He’s got bar graphs and statistics from meetings of the The Homeless Coalition. Angel tells me about his first responder skills—how he teaches them to the homeless population. He tells me all about his involvement with Be Loved and how the Homeless Initiative Advisory Committee has a goal of ending homelessness within the next five years.

Angel is homeless. He’s been homeless for years and when he tells me this, I don’t know what he wants me to say. I mean, I think the question we try not to ask is why? Or How? And I don’t think those are wrong or inappropriate questions. For many, the back story is important. The only way they can make sense of the present is to continually re-weave the events leading up to it. But, this is not the case for Angel. For this friend, the past is something about a 16-year marriage gone awry. It’s something about a bad record. But mostly, it’s just not worth talking about. “I’m just trying to do good now,” Angel says. And isn’t that all any of us can do?

In his book, Just Mercy: A Story of Justice and Redemption, criminal defense attorney, Bryan Stevenson states, “Each of us is worth more than the worst thing we’ve ever done.” I don’t know what Angel has done. I don’t know what has been done to him. And this goes for just about everyone, really. What I do know, is that after 3 days of rain, it is nice to bask in the sun. I know the onions are coming up by the tens and that brownie at lunch was the best dang brownie I’ve had this year. I know Angel and I are sharing space and time and I know that this matters. And I know a strong back story, is some times only, just that.