Rick Baylor’s calling entered his heart early, but it took a while to develop.

He grew up in Washington, DC, in a family of preachers and teachers and going to church. When he was a young boy and he and his playmates would see people on the street with addiction problems, he was concerned.

At that young age, Baylor had conversation with a troubled man he’d seen on the street and, finding him sober, asked him, “Would you like to get some help?” The man said yes and Baylor took him to the century-old Central Union Mission. 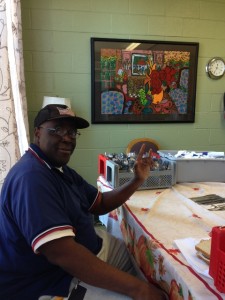 When he told his mother what he’d done, she suggested he might have found his calling. His father told him, “Part of life is helping people.”

However, alcohol took up years of Baylor’s own life. After a couple of decades, he was doing remodeling in Spartanburg and things were not going well. He checked himself into the rescue mission and asked for help.

Soon Baylor was a core-volunteer with Western Carolina Rescue Mission, doing security and working with people in the men’s dorm. “I got on my knees and I surrendered. I have never looked back,” he said. Proud of being an uncle to 127 nieces and nephews, he said, “My family was blown away” by his changes. He’s been at the WCRM eight years.

Last month Rick stayed with us at the Haywood St. Respite, recuperating from surgery. Now he’s back to the work of sharing God’s grace with the folks who come to the mission. He enjoys offering hope and counsel to those who come there. He doesn’t worry about money. “I found out money gets me in trouble. Everything belongs to God.”

Rick returns to Respite regularly now on Thursdays and sometimes Fridays to help roll clean silverware into cloth napkins for the next week’s Downtown Welcome Table lunch. With 400+ sets required, that’s a lot of rolling!