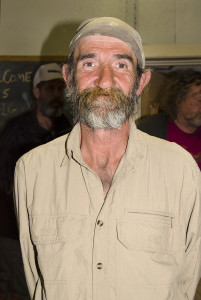 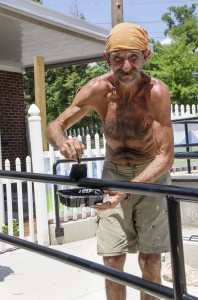 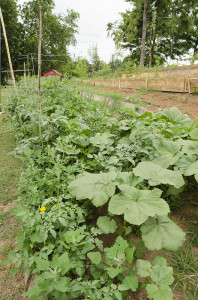 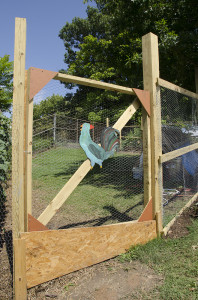 “This place saved my life,” declared Dewey as he related the story of his involvement with Haywood Street Congregation.  Working in the garden, his hands in the dirt, reminds him of childhood days growing up on Biltmore Dairy Farm here in Asheville.  He says it also has drawn him much closer to God, to whom he refers as “The Boss.”

This love of outdoor life is in his blood too — his Irish ancestors were stone masons, some ancestors were Cherokee, some farmed the land around Sodom Laurel, and his grandfather was a blaster with the WPA during the construction of the Blue Ridge Parkway.  Dewey has spent the past ten years living in a tent, camping outside even during the harshest of our mountain winters.  He considers himself something of an expert on outdoor survival skills, and is obviously proud of his well-maintained ‘home’ under the stars.

While Dewey has become the ‘go-to man’ who gets things done around the HSC campus, he is quick to share credit for the amazing transformation of the garden and grounds this summer.  He first mentioned Molly, Sarah, and Lynne as the ‘originals’ who first got the garden started.  Among the more recent helpers he named are Alfredo, Daniel, Mike, Big Bill, Chris, Jay, Carlton, Josh, Little Josh, Norbert, Kimberley, Rachel, and Kelly.  “And don’t forget Debbie and Moe,” he said, “who have been helping Dave take care of the chickens.”  It’s dangerous to name names for fear of omitting some, but the impressive thing is that so many from all walks of life have pitched in to help.  While some have spent money from disability checks to purchase plants and garden supplies, many others, even from businesses like B.B. Barns, have contributed plants, supplies, and labor.
For example, when Erica hurt her foot trying to get down the slippery bank from the garden to the kitchen, Dewey and Jay thought of building a walkway down the bank.  They drew up a plan and discussed it with Dee.  Dee asked them for a list of things they thought they’d need to construct it, and Dewey said everything needed was delivered the very next morning!  We now have an attractive, safe, functional rock walking path, complete with wooden hand rails.  Dirt from this construction project has been moved to an area where there is now a plan to construct a handicapped ramp.
Dewey and his friends have just finished painting the rails along the sidewalk near Respite and are now making plans for the fall/winter garden.  They are planting kale, winter peas, spinach, and collards, and are hoping to acquire some cabbage plants soon.
What’s next?  Dewey says he is just waiting for instructions from the Boss, one day at a time!
Next Post
Previous Post