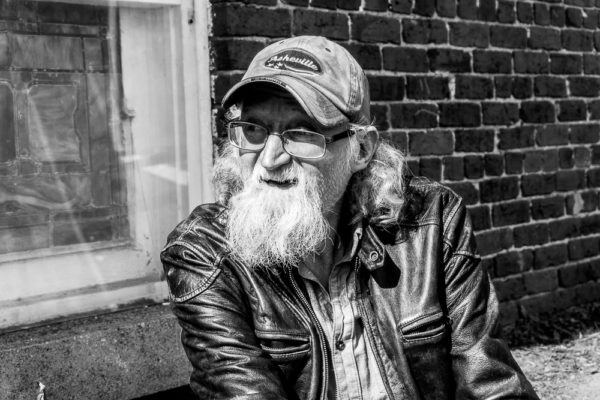 In Iredell County, outside of Statesville, beyond where the asphalt road gave way to the dirt path, Johnny Munroe Perry grew up on a working dairy farm. He was the youngest boy of six, raised on milk from the utter and watermelon from the patch. Years later, his daddy sold the land to scrap metal, wire brushing used car parts for resale and crushing the rest for steel by the pound. All along, his mother managed the home and the volatility of manic depression best she could until a convalescence at Broughton Hospital. During the week, Johnny maintained good grades in public school. On Tuesday evenings, he loved watching the Fonz on Happy Days. On Saturdays, the livestock auctions. On Sundays, Church. After graduating, he took over the family home. But one drink led to another, and he landed in Asheville destitute, taking the street name John the Baptist.

The original John the Baptist was homeless too, a prophetic itinerant who loitered on the muddy banks of the Jordan River and in the craggy expanses of the Palestinian wilderness. While he didn’t have a blond and grey mullet, a dog chain securing his wallet, or a chopper bicycle with a banana seat, his presence was equally intense. Locust antennae stuck between his teeth; wild honey crystalized in his matted beard; animal hides lashed to his earthen skin. Despite his daunting appearance and solitary leanings, John was rarely alone. Throngs of people- Jerusalem suburbanites, Bedouin nomads, vendors up from Jericho pushing humus carts- surrounded him with frantic anticipation.

With broken limestone as his chancel, a Cedar stump as his pulpit, and a preaching fierceness that would finally get him arrested and beheaded, John bellowed a sermon the masses were desperate to hear. In this oracle that’s influenced everyone from Jesus Christ to John Wesley, what’s the Good News?

Matthew 3:1-6 In those days John the Baptist came, preaching in the wilderness of Judea and saying, “Repent, for the kingdom of heaven has come near.” This is he who was spoken of through the prophet Isaiah: “A voice of one calling in the wilderness, ‘Prepare the way for the Lord, make straight paths for him.'” John’s clothes were made of camel’s hair, and he had a leather belt around his waist. His food was locusts and wild honey. People went out to him from Jerusalem and all Judea and the whole region of the Jordan. Confessing their sins, they were baptized by him in the Jordan River.

John baptized everyone without precondition.

By locating in the wilderness, not Jerusalem, John pointed to God outside of Institution.

Arabs and Jews, mortal enemies, were brought together.

The 2000 Republican presidential primary featured a Navy pilot held prisoner of war from Arizona versus a cowboy governor from Texas with a famous father. They sparred over requiring gun manufacturers to install trigger locks, the rights of inmates on death row, campaign finance reform, and Y2K oversight. When the campaign trail blazed through South Carolina, reporters asked John McCain and George W. Bush if the confederate flag, flying over the capitol dome, should remain. Bush answered, let the state decide. McCain, however, responded that the flag is a “symbol of racism and slavery.”1 The next day, unfolding a prepared statement, he read, the stars and bars are a “symbol of heritage.”2 After eventually losing the nomination, McCain returned to Columbia. In a stunning act, unlike anything we’ve ever seen in modern politics, he publicly addressed his fellow conservatives saying, “I feared that if I answered honestly, I could not win the South Carolina primary… So I chose to compromise my principles. I broke my promise to always tell the truth. [And] I can only try to refuse future temptation to abandon principle for expediency…”3

During every election cycle, the cynics denounce a new round of candidates, dismissing all politicians as incapable of moral maturity. The Church has done the same, misappropriating religious language like confession and sin to mean a fallen creation is depraved, irredeemable. And culture is currently obsessed with canceling the next offender for a real or perceived mistake by revoking their humanity forever.

When adulterous husbands and swindling tax collectors, brazen soldiers and self-loathing perfectionists, misfit camel drivers and ministers with messiah complexes, and everyone else from the region encircled John the Baptist, they likely expected to hear a firebrand message of eternal damnation. Instead, John’s first utterance was, “REPENT!” A hopeful word translated as a turning back or a repointing of behaviors.

Convinced we, then and now, with God’s help, have the capacity to change, John thunders the Good News. Actions aren’t intractable; life can become unrecognizable; there’s still time to reverse yourself.

Our beloved John the Baptist was a repentant soul. Often contending with abject loneliness, he grabbed the world by the arm, pulling her into relationship. Overwhelmed by substance use disorder, he strung together seasons of sobriety by dogearing every page of the Big Book. Silenced by poverty, he dug a harmonica out from his backpack to blow another tune. Disorganized by mental illness, he wrote two books, the second entitled, “Preacher without a License.” And before he defied the streets and died a housed man, I overheard someone wonderfully say, “John, you just don’t seem like yourself anymore.”

Just as Johnny Munroe Perry has already done, following the United Methodist baptismal vows that carry us from font to grave and beyond, “On behalf of the whole Church, I ask you: Do you renounce the spiritual forces of wickedness, reject the evil powers of this world, and repent…?”4