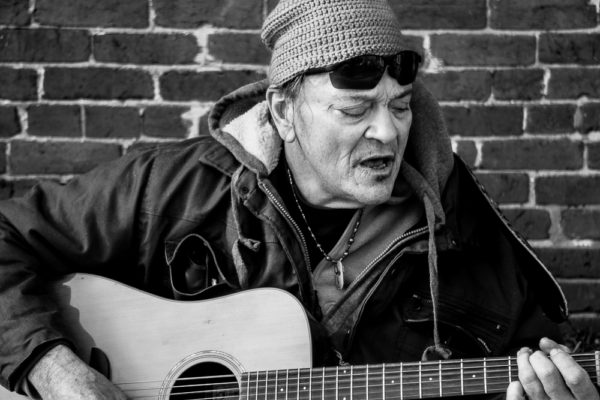 There are not too many native Ashevillians among us
But he was one
Kim Arthur Bailey was born in Asheville on January 30, 1961
He told Brook that he was named after the main character in Rudyard Kiplin’gs “KIM”- a story about a man on a quest
And he did indeed live up to his namesake.
Like The character Kim, Kornbred (With a K and no A) had many adventures. He travelled around on his search
As a youngster he claimed Lexington avenue as his territory, he and his gang, making mischief and music
From the tobacco fields of Western North Carolina to Tampa and back with a couple of stints spent in incarceration, this self proclaimed “playboy, rockstar and professional mechanic” travelled about the country and eventually ended up right back in Asheville, back home.

I don’t remember when I first met Kornbred.
I don’t remember the first time I heard him sing.
I do remember many, many conversations and songs. I remember his gruff voice and the rocka billy style he added all his songs. Strumming his guitar or someone else’s with joy and passion I remember conversations and songs at the picnic table in the parking lot, on the porch at respite and right here in this room
On good days he gave voice to his gratitude, offering a word of thanksgiving before singing in worship and on not so good days he gave voice to his suffering, his struggle with addiction, sores on his legs and and sleeping on the streets.
Some days I’d get to work and everything he owned would be strown across the parking lot He was always glad to see me though.
I loved to listen to him and talk with him and yet I can’t remember the first time I saw him.

Our scripture today is from the gospel of Luke and it is one of many parables Jesus offers while he is on his way to Jerusalem. Parables are a way of telling a story that insists the hearer interpret it for themselves. Sometimes Jesus offered a meaning but most often he did not. Today’s parable is one he did not offer an interpretation and that is too bad because it is kind of a hard one. It would be easy to come to a quick conclusion about the parable of Lazarus and the rich man but I think a quick interpretation would do it injustice.

Jesus offers us a picture of a rich man. He is dressed in fine purple clothes and he eats sumptuously every day. His closet is filled with Versace and all his meals are prepared by a private chef when right outside his door there is a man who is dying.
He is destitute, starving, covered in sores.

The men died on the same day and found themselves in very different situations. The rich man in torment and the other in rest.
One of the most unsettling parts of the parable for me is the ‘great chasm’ and the finality of it all.
As we listen to Rob read these verses I would like us to consider, what are we supposed to learn from the rich man and Lazarus?

Luke 16:19-31
19 “There was a rich man who was dressed in purple and fine linen and who feasted sumptuously every day. 20 And at his gate lay a poor man named Lazarus, covered with sores, 21 who longed to satisfy his hunger with what fell from the rich man’s table; even the dogs would come and lick his sores. 22 The poor man died and was carried away by the angels to be with Abraham.[a] The rich man also died and was buried. 23 In Hades, where he was being tormented, he lifted up his eyes and saw Abraham far away with Lazarus by his side.[b] 24 He called out, ‘Father Abraham, have mercy on me, and send Lazarus to dip the tip of his finger in water and cool my tongue, for I am in agony in these flames.’ 25 But Abraham said, ‘Child, remember that during your lifetime you received your good things and Lazarus in like manner evil things, but now he is comforted here, and you are in agony. 26 Besides all this, between you and us a great chasm has been fixed, so that those who might want to pass from here to you cannot do so, and no one can cross from there to us.’ 27 He said, ‘Then I beg you, father, to send him to my father’s house— 28 for I have five brothers—that he may warn them, so that they will not also come into this place of torment.’ 29 Abraham replied, ‘They have Moses and the prophets; they should listen to them.’ 30 He said, ‘No, father Abraham, but if someone from the dead goes to them, they will repent.’ 31 He said to him, ‘If they do not listen to Moses and the prophets, neither will they be convinced even if someone rises from the dead.’ ”
——————————————————————
Things to consider:
Is the great chasm that exists in death simply a continuation of the gate that separated them in life?
This is the only parable where a character has a name. Lazarus – in Hebrew El-eazar-means God has helped
Did the rich man put his trust in clothes and money while the poor man, even while he suffered, put his trust in God?
Abraham’s side- bosom in NIV meaning reclining at table -at place of honor Hades=?Sheol ?the place of departed souls ?the properly unseen
Rich man wants Lazarus to take care of him
Sees Lazarus as servant
Great reversal- the Magnificat Luke 1:53 he has filled the hungry with good things and sent the rich away empty.
Great Chasm a space
The rich man accepts his fate and is concerned about his family (not just himself anymore) and yet he still expects Lazarus to be a servant and to take care of his family
Some one coming back from the dead (looking ahead -Jesus) will not be enough for some to change their ways
—————————————————————————————–
The rich man spent his time and money attending to his own needs never noticing, never seeing the man by the gate. He did not see the man wasting away.. He did not see the man who was clamoring -hoping- to gather the scraps from the rich man’s gourmet meal. He never saw the human being right outside his door covered in sores and dog slather. He never saw the suffering of others.
He never saw the other.

When their time on earth had ended both men were taken to their new place. The reversal begins immediately.One buried, probably at a pretentious funeral and one gloriously taken away by angels.
Even in their new respective roles, Lazarus lifted up and the rich man in agony, the rich man did not see Lazarus.
Even after being told by Abraham the way things are now, the rich man did not see Lazarus. He only saw a servant. He only saw someone to meet his needs.
He never saw
He never saw who Lararus really was. Not a man to be pitied or fixed or worse an object to be stepped over or ignored. Lazarus was and is an honored guest. Fully seen by God

What can we learn from this parable?
I think this parable is less about wealth and poverty.
And more about seeing and awareness.
Warnings about being unable or unwilling to see
The parable warns us that our self imposed blindness robs us of rest and displaces us from a place of honor.
It is dangerous to live an inward facing life.
It jeopardizes our intimacy with others and our intimacy with God and creates a space, a chasm, that is not easily traversed.
Jesus teaches us through this parable the peril that awaits those who refuse to see the other. The void created by our blindness
During his time on earth Jesus saw those whom others did not, the leper, the hemorrhaging, the possessed, the poor.
Jesus saw those whom we would rather not see

I don’t remember the first time I saw Kornbred. Maybe that was because at first I didn’t see him.
He saw me.
He said he was grateful for me and that he thought I was a good pastor
He pointed out to me that I usually sing in the key of D
He gave me a blue guitar to hang in my office
He shared his pain and at times his anger and afterward he would share an apology. He saw me as a friend
He was my friend
And I saw him, finally.

We encounter people everyday that we don’t see
People whose lives are spread out all over the street, whose pain spills out in cries of despair and whose poverty we at times have to step over.
An inward facing life is dangerous
It limits our nearness to God and inhibits the coming kingdom
Step outside your gates of comfort and see
Turn your gaze, your focus outward and see
Look around- not for a project to be fixed or an obstacle to be avoided
But look around for a friend
Look around and see, who is at your gate?
Look around and see the kingdom come on earth as it is in heaven.