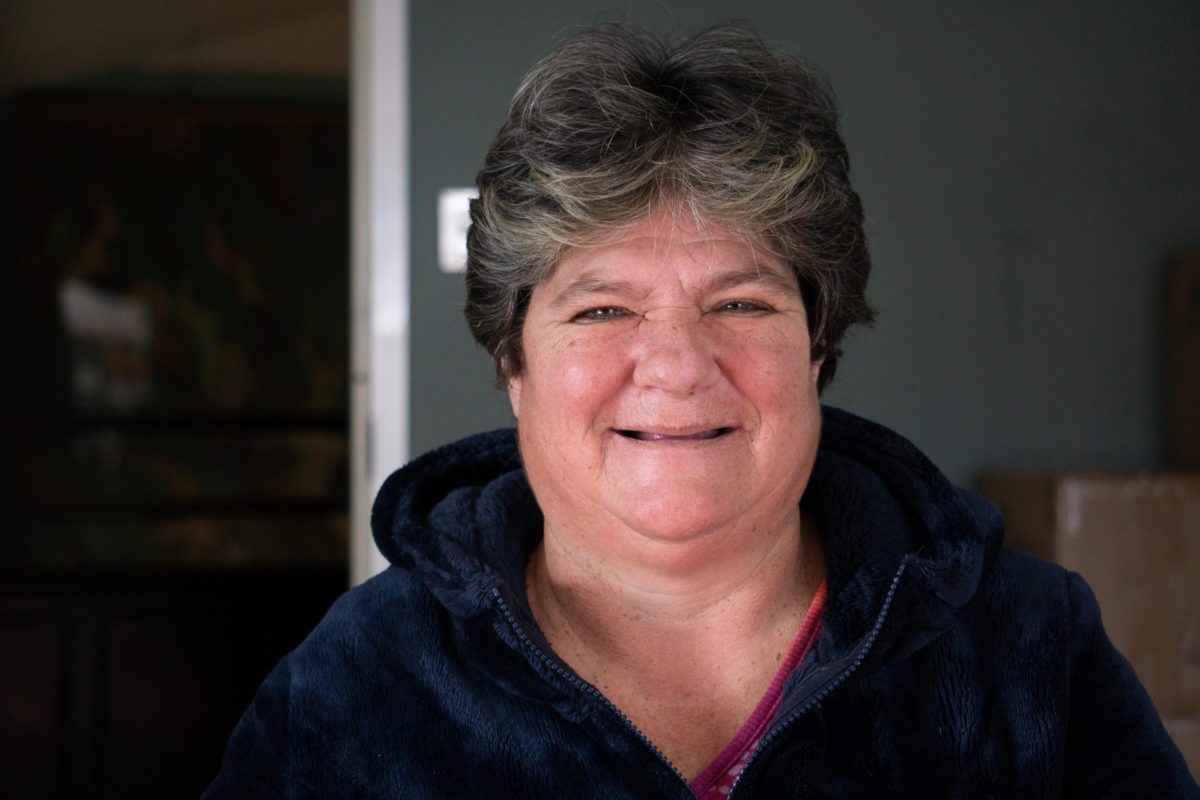 Adopted at birth, Nancy Bennett grew up with autism in Connecticut before boarding school in Lenoir brought her to Western North Carolina.  Strolling the boardwalk at Myrtle Beach and skiing the Black Diamond at Cataloochee Mountain were her favorite pastimes.  But when life wasn’t an ocean breeze or a Parkway vista, she struggled to put the bottle down and struggled, even more, to pick up house keys to a permanent address.

To faithfully eulogize Nancy, looking over the facts of her biography isn’t enough.  To know her fully and finally requires a close examination of her spiritual obituary, the movements of love that didn’t make the local paper.  The Biblical writers could have been making a similar consideration when they included a story, only found in the book of Acts, about a little-known woman named Dorcas.

In Aramaic, she’s Tabitha, in English Gazelle, in Greek Dorcas. Regardless of the translation, her name was common among slaves, an every-woman dependent on the welfare state for survival.  She had no wealth, no power, no property, but she did have a thimble and a wheel to spin thread.  A widow herself- the profile of poverty in Ancient Palestine unlike middle-aged single men in America- she took on the spiritual discipline of weaving tunics for other widows left destitute out in the elements.

In addition to her clothing ministry, why does the story of Dorcas get recorded in scripture?

Acts 9:36-43 Now in Joppa there was a disciple whose name was Tabitha, which in Greek is Dorcas. She was devoted to good works and acts of charity. At that time she became ill and died. When they had washed her, they laid her in a room upstairs. Since Lydda was near Joppa, the disciples, who heard that Peter was there, sent two men to him with the request, “Please come to us without delay.” So Peter got up and went with them; and when he arrived, they took him to the room upstairs. All the widows stood beside him, weeping and showing tunics and other clothing that Dorcas had made while she was with them. Peter put all of them outside, and then he knelt down and prayed. He turned to the body and said, “Tabitha, get up.” Then she opened her eyes, and seeing Peter, she sat up. He gave her his hand and helped her up. Then calling the saints and widows, he showed her to be alive. This became known throughout Joppa, and many believed in the Lord. Meanwhile he stayed in Joppa for some time with a certain Simon, a tanner.

Chance for God’s glory to be revealed.

A reminder that every congregation needs a Dorcas to thrive.

The United Methodist Church has a strange practice for every male ordinand.  After completing the credit check, dozens of essays, countless meetings, psychological examinations, and day-long interview intensives in front of committee panels- an exhaustive process repeated during a three-year provisional period- clergy-to-be, if confirmed, are ordained at the hands of a bishop on bended knee. At Lake Junaluska, nearly fifteen years ago, I was walked off the stage at Stewart Auditorium and told, “Congratulations on becoming an Elder and congratulations on officially becoming a United Methodist woman.  Your ordination is an honorary inclusion into the most consequential group in our denomination.  Even though most people on Sunday mornings have no idea, women do the vast majority of discipleship in each of our congregations. Without them, our sanctuary doors would immediately close.”

As the first doors of the ancient church opened and the Bible became holy writ, the first forebearers of our faith recorded the story of Dorcas, I believe, because they knew that none of us, regardless of our gender, were going to be celebrity pastors, receive a blue ribbon for our altruism, or get nominated for sainthood.  With Dorcas and the United Methodist Women as exemplars, all of us, instead, are invited to live in service beyond the reach of recognition and die a Christian no one has ever heard of.

Preferring anonymity over acclaim, Nancy’s spiritual obituary included the quiet hospitality of being a maid, changing bed sheets at the Foundry Hotel.  Delighting in the PRN graveyard shifts at Respite, she watched over the restful hours of sleep while people healed post-hospitalization.  Offering her spare couch during intermittent seasons of temporary housing, she kept a soft place to land for her unhoused friends.  And, in the last days, according to her husband Michael, she frantically took to needle and yarn without interruption.  When asked about the furious pace of her knitting, she replied, “I want you to have this blanket, a reminder of our marriage to keep you warm.”  After presenting it to Michael, she died hours later in her sleep.

To those shivering in grief, may God’s love surround you, and may Nancy’s life be a witness of how to follow our Savior into obscurity.