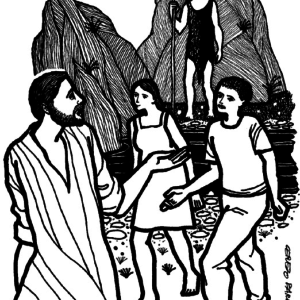 In the United Methodist Church, ordination requires an undergraduate degree and a Master of Divinity.  Each ministry candidate has to be endorsed by a local church and then certified by an annual conference. After multiple interviews with various committees, dozens of essays, background and credit checks, reference letters and referrals, and a psychological assessment, three years of provisional ministry is required before submitting more essays and going through more interviews.  If you get through all of that without incident, then a bishop lies on hands and says, “take thy authority as an elder to preach the Word of God, administer the Holy Sacraments and order the life of the Church.”

The process is exhaustive and the vetting extreme, as it should be.  But because of all the degrees, qualifications and checked boxes, it would be easy to assume that following Christ can only happen after becoming a professional Christian.  But in today’s text, John’s Gospel narrates, not an involved ordination process, but a simple commissioning of the very first followers.

What qualifications are needed to become a disciple?

John 1:35-42 The next day John again was standing with two of his disciples, and as he watched Jesus walk by, he exclaimed, “Look, here is the Lamb of God!” The two disciples heard him say this, and they followed Jesus. When Jesus turned and saw them following, he said to them, “What are you looking for?” They said to him, “Rabbi” (which translated means Teacher), “where are you staying?” He said to them, “Come and see.” They came and saw where he was staying, and they remained with him that day. It was about four o’clock in the afternoon. One of the two who heard John speak and followed him was Andrew, Simon Peter’s brother. He first found his brother Simon and said to him, “We have found the Messiah” (which is translated Anointed). He brought Simon to Jesus, who looked at him and said, “You are Simon son of John. You are to be called Cephas” (which is translated Peter).

Since 2011, Haywood Street has hosted an immersion summer program where groups of young people learn about poverty. Much of the time is intended to provoke questions like: Even though businesses have a sign out front that says, “customers only,” are bathrooms a human right?  And, if the City encourages beer tourism and gives tax incentives to breweries, then why do the guys waiting outside the shelter get so many open containers citations?  But even more impactful than the discussions and debates, the biggest takeaway is almost always the four-hour walk around downtown.  They go to AHOPE and witness the day center; the public spaces where all the park benches have a welded armrest down the middle so no one can nap, the lobby of the Salvation Army where sleeping mats are distributed during Code Purple. At noon one particularly hot Tuesday, a middle school girl pulled me aside with sweat collecting on her forehead, swollen feet from pounding the asphalt, sore shoulders from carrying her backpack and said, “Back home, this time of day, I’d still be laying around in my own bed with a TV hanging on one wall, a private bathroom to my left and a stocked refrigerator to my right.  But today, after walking six miles, I now realize how hard it is to just survive, all the going back and forth from agency to agency all day every day.  I now realize that being homeless is a fulltime job. Before, I used to think people on the streets were lazy, now I think I’m the lazy one.”

We all know the sedentary lifestyle has consequences for our physical health- high blood pressure, type 2 diabetes, stroke.  But even more concerning is what laying around does to our spiritual lives.  It keeps us under the covers well past lunch, alone with our unchallenged assumptions, cloistered from the lived experience of others, and isolated from the movements of God.  Faith, apparently, that isn’t exercised daily quickly starts to lose conditioning.

According to John’s Gospel, no decision about the scientific accuracy of the Immaculate Conception, no well-developed atonement theory, no degrees and no clergy collars are necessary to start.  The only qualification needed to become a disciple is that you’re a willing pedestrian.  When Jesus says to Andrew and his friend, “Come and See,” the first directive is simply to follow God’s footsteps.

And oh where that grand adventure will lead: to the wedding banquet where the good wine is served first, to the delivery room where Nicodemus is born again, to the well of living water where thirst is no more, to the feast where five thousand are fed on a boy’s bag lunch, to the tomb of death where Lazarus returns to life, to the corner of blindness where sight is restored.

For those of us who have stopped our practice, who find our spirits lethargic and our Christianity flat-backed, feel encouraged that we come from a long line of ancestors who were wandering Arameans, rambling roughnecks and traveling seekers, followers who exercised their discipleship most by moving their feet.

If Christianity began as and continues to be the religion that doesn’t stand still, then it is time to strap on our sandals and take a walk in the world.