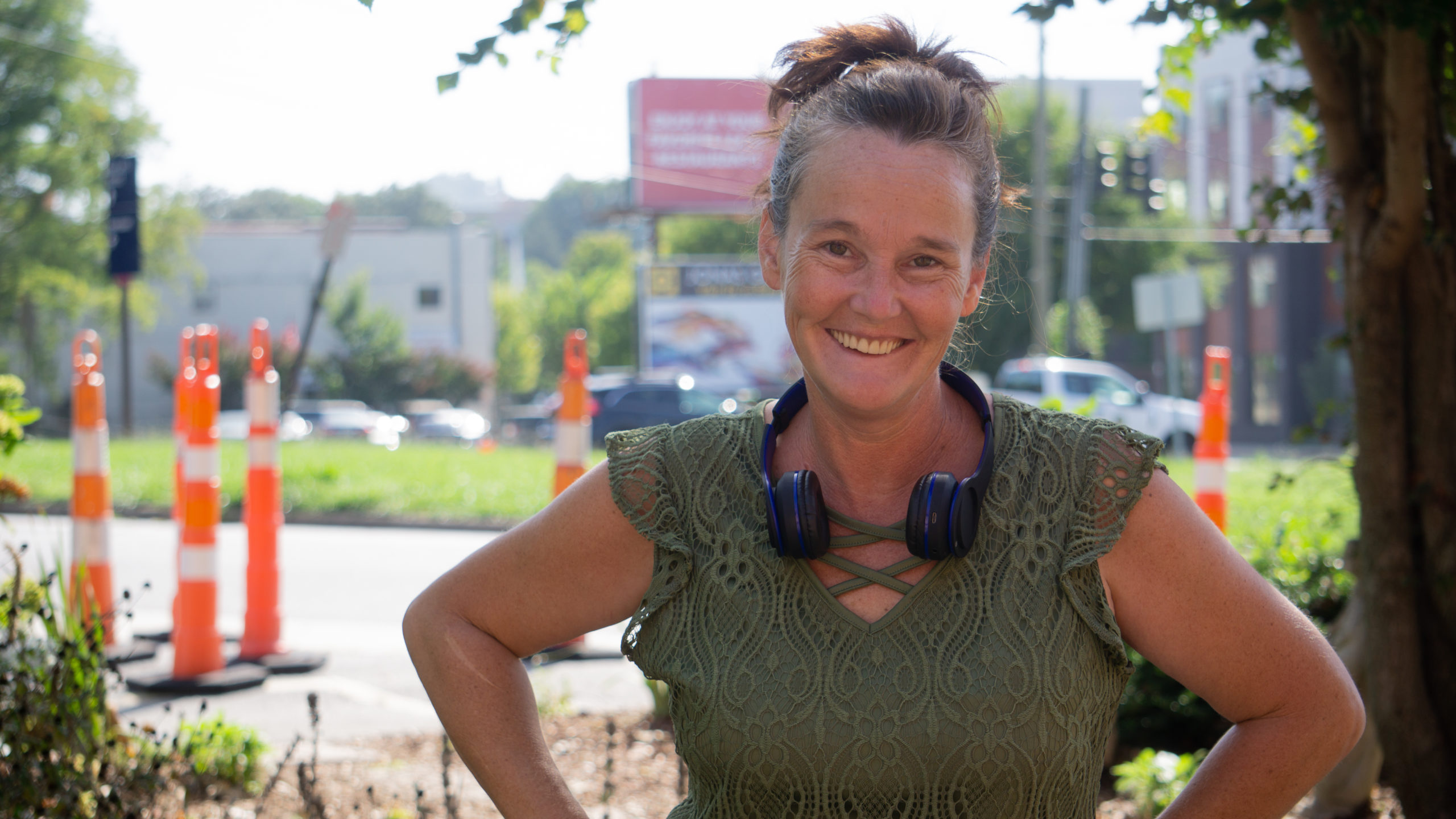 To know Pamela is to love her. Easily. The streets call her Peppermint Patti. Or Hurricane. Haywood Street calls her a Child of God.

It’s a Wednesday morning and she catches me as I’m leaving the building. “When you gunna let me tell my story?” she asks. “Right now.” I grab a pen and paper and we meet around back in the garden.

I seat myself on one side of a picnic table. Moments later, I look up. Pamela is still standing. Pacing. Sizing up the bench and the complexities of getting her body to successfully sit on it. I forget. Pamela has chronic pain; the result of years of manual labor, injuries, domestic violence. She hurts all the time and you would hardly know it. Strong. Like a hurricane. 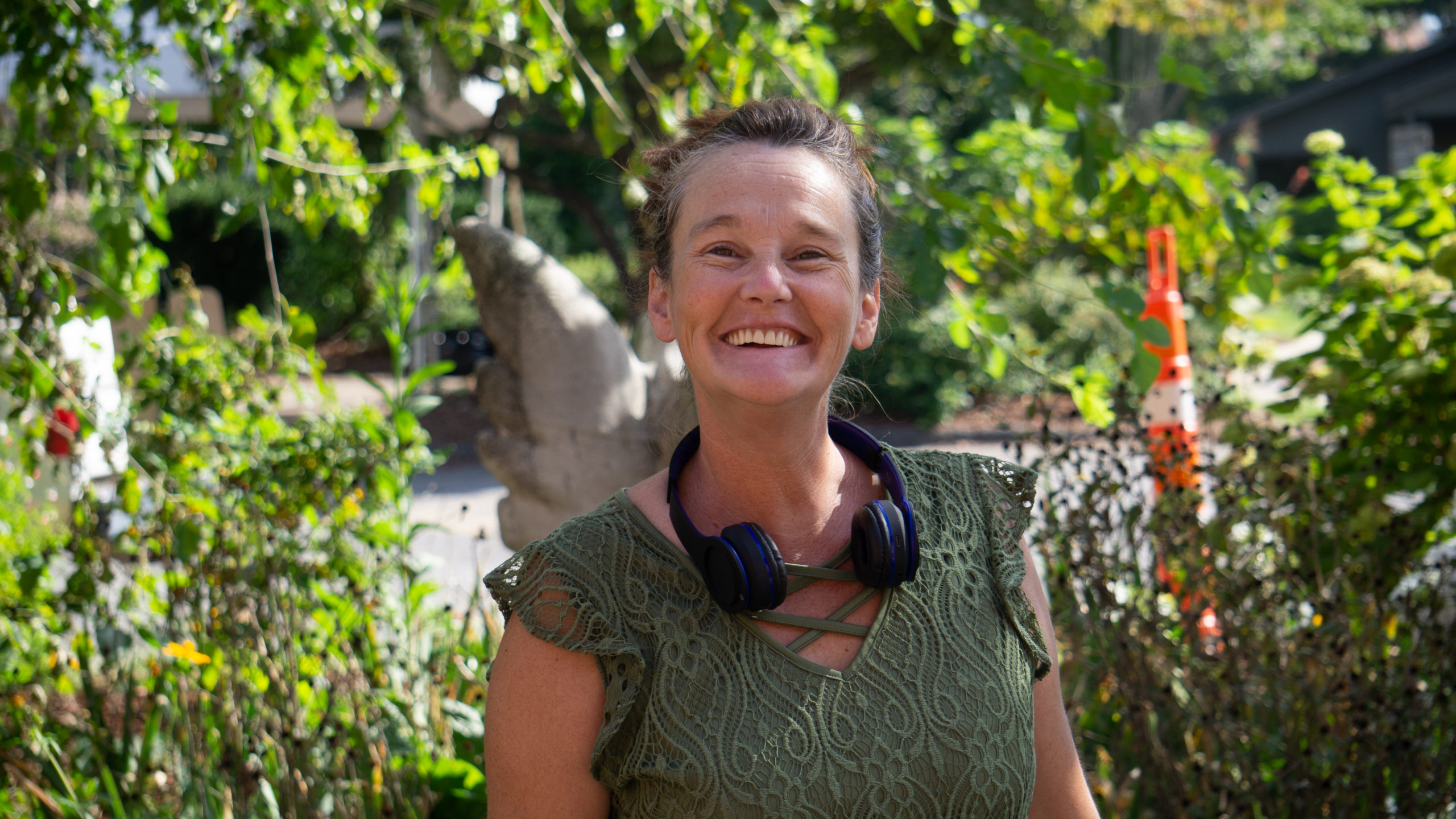 Pamela grew up not far from Asheville. She was a cheerleader and a basketball player. She dreamed of being a diesel mechanic and joining the Air Force. But by 19, reconnaissance, air traffic control, and engine grease had taken a back seat to diapers, pacifiers, and certified motherhood credentials.

While drugs do not have a place in Pamela’s story today, they did for a time. In her twenties, a boyfriend introduced her to cocaine. He also introduced her to being in the wrong place at the wrong time. Without knowing his plans, Pamela became an accessory to a crime; a robbery with a failed getaway. Pamela has lived with the consequences of this event, and the felony it branded her with, for over 2 decades. Jail, probation, court costs, and restitution are not where her punishment ended. In fact, her criminal record has been one of the most faithful things in her life—by her side through every failed employment opportunity, and housing rejection letter; every day spent with no guarantee of food, and every night on the streets, holding strong until morning.

Pamela learned of Haywood Street while staying at the Mission. “Open arms. That’s how I was received here. It felt like true Christianity.” The thing about Haywood Street though, is the giving rarely moves in one direction. As Pamela was received, so too was she reaching; quickly pulling others up, and closer, and from the back of the line to the front. She began volunteering in the clothing closet, sharing her testimony during worship, sitting with Friends who were navigating impossible situations; giving generously the gift of her presence.

“There is a question we ask ourselves around here,” I tell Pamela. “What are you learning about God, Self, and others? How would you answer that?” “What I’m learning about God,” she says “is God has, and will always, provide everything I need. About self—taking time to work on me is hard. And about others—some of them really want to see my progress.” She goes on, “You know, I came to Asheville to do better. To be better.” Pamela wants to be the best grandmother she can be. She wants to work. She wants to learn how to play the guitar.

It’s understandable to think you know the narrative of an unhoused, or housing-insecure person. Make them as other from you, and it keeps a cushy feeling to it all. Start to understand that a person’s current struggles are often the result of mistakes and mishaps from long ago and the feelings can get dicey. An unexpected divorce, pregnancy, job loss, run with addiction, bout of depression. You. Me. Banana slips.

When we talk about unhoused and housing-insecure humans, we’re often talking about the Pamelas of our town. The devoted grandmothers, the active members of our church community, the folks who would happily work a minimum wage job if they were physically able.

Pamela is the newest addition to the Haywood Street Community Development Board of Directors. Praise God.

We are leaning into her lived wisdom and effervescent spirit to help guide the future of Haywood Street housing—an endeavor aimed at providing dignity through dwellings and connection through community.