Chances are you’ve seen Laura around town. Probably walking down Patton Avenue clad in a long skirt and an ear to ear smile on her face. She’s known for being “the woman who rides her bike to Florida and back every year.” If that doesn’t bring her to mind, then like me, you likely first know her by that contagious smile and vibrant spirit.

I’d been inviting Laura to tell me her whole story since June after hearing pieces of it, but we hadn’t had the chance to actually sit together. Finally, on a Wednesday in September, she finds me in my office. As if the stars have finally aligned, I close my computer, pull out my phone to record, and say, “Ready when you are.”

She begins by telling me about a surprise birthday trip to Chimney Rock and Lake Lure. I already know Laura loves nature–blooming flowers and tall trees that give her shade. This is where she feels connected, so I reckon this trip was quite significant.

There’s a pause as we listen to a man outside the window strumming on his guitar and singing a soulful love song. Almost like this is the transition she needs, Laura’s voice shifts. “There’s something I want to share, as well–as far as what’s happening in the world, and all the chaos that’s here.”

In an uncharacteristically resolute and serious tone, she continues, “The real root cause of why there is so much suffering and trauma is because people have created the idea that we’re separated. It’s a false illusion of separation, that we’re separated from nature and each other. And the only solution is connection.”

The overt, eloquence of this diagnosis takes me off guard as I recall the shared pieces of her past. “How did you get to this place with everything you’ve gone through?”

Laura tells me she grew up with this illusion. Her experience of being abused through childhood and into adulthood distorted her view of the world and of herself. In an effort of self protection, her body taught her it wasn’t safe to trust people. “I was afraid people would take advantage of me and dominate me. And I just got tired of that, of being mistreated.”

Laura’s worldview began to transform when she was twenty-five and living in Manhattan. She had just left her family in South Carolina after losing custody of her two daughters. The heartache of not having her children left her re-traumatized. Maybe to distract herself from the loss or maybe intentionally, Laura read whatever she could about social activism, women’s rights, and black and Native American history. The introduction to Womanism taught her the importance of finding healing, and fundamentally, of the importance of social liberation.

Laura’s mother repeatedly told her that she would never be smart enough, capable enough, pretty enough–just enough. And she believed it. “I’ll never know why she kept me,” she says. “She never loved me.”

Laura tells me now that her biggest regret is believing the lies that she would never be good enough to be a mother to her daughters. That’s ultimately why she didn’t put up a fight when her mother filed for custody of them. “I had no courage back then. I wish I fought for my girls, but I went to New York instead because I couldn’t bear the pain of not having them.”

I don’t know Laura to lack courage. And I also don’t know Laura to be without worth. Richard Rohr says that every once in a while we come across someone who reminds us that the Kingdom of God is a reality that breaks in here and there(1). Laura has been one of the many reminders at Haywood Street that God’s Kingdom isn’t waiting for us in the future or lost to the past. It’s showing up now.  And when we wash the thick film from our eyes, we’ll see it right in front of us. We’ll see it break in through the addict embracing a friend after an argument and in the unhoused woman on the piano, singing of having faith in the valley. Because when the chaos is holy, the Kingdom is present.

It’s been a couple of weeks, and there’s been movement in Laura’s effort to find healing. She can’t wait to tell me about it. She’s undertaken a project called “Rewrite Your Toxic Life Story.” This is when I learn that Laura has been writing down the lies she’s been told, and then, on the opposite page, she’s written the truth as she knows in her head, but needs to feel in her body. 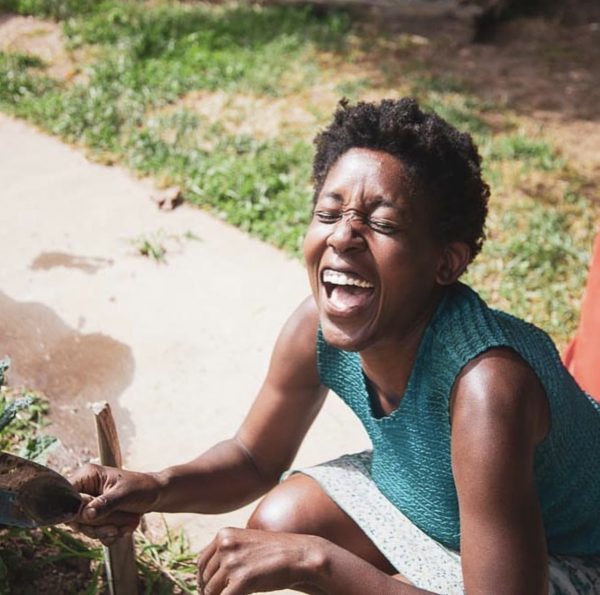 She reads her story, and I feel pressure build behind my eyes. Listening to her, I get a sense of her torment and I wonder how anyone can live under the weight of it. She gets to the lie about being a mother. Being a mother myself, I really feel the sting of this one. “I will never be a good mom. I will always be alone because I failed at motherhood.” I see her struggling with pressure behind her eyes, now, too.

The truth follows, though, and how perfect and undeniable it is. Yes, Laura, you are strong, resilient, courageous, capable, and beautiful.  Like a gem being wiped from the build up of grime and corrosion, you are an example of God’s Kingdom breaking in. And just like that gem, your glow is unmistakable.

Laura wants to do a video recording and share it with the community so others know they can shed the lies they’ve also been told. But it’s November now, and I haven’t seen Laura in a couple of weeks. I assume she’s made her trip back to Florida by now.

So, I remind myself that when the Mountain Laurels begin to bloom, Laura will be making her trip back to the mountains. That’s when I will look for her and continue the story. For the good of the Kingdom.