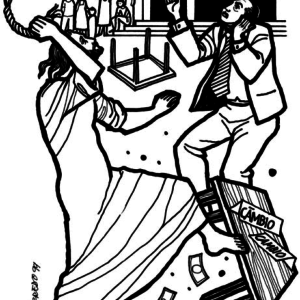 Christianity, for many, is a sin management program, a strict regimen to control the passions ofthe body.  Fast to discipline our gluttonous appetites; practice chastity to suppress our lustful desires; empty the account to bankrupt our material greed; crawl through life head down to renounce our boastful pride.  Faithfulness then is defined by the emotions we don’t engage.

But when Jesus shows up at church in Jerusalem, he’s anything but restrained.  The adrenaline rushes his blood stream and his muscles flex, his heart rate increases and his skin sweats, and he grips his leather whip to instigate a riot.  In today’s text, Jesus isn’t nice, or polite or accommodating or discreet, instead, he’s filled with the most ungodly impulse of all: anger.

John 2:13-25 The Passover of the Jews was near, and Jesus went up to Jerusalem. In the temple he found people selling cattle, sheep, and doves, and the moneychangers seated at their tables. Making a whip of cords, he drove all of them out of the temple, both the sheep and the cattle. He also poured out the coins of the money changers and overturned their tables. He told those who were selling the doves, “Take these things out of here! Stop making my Father’s house a marketplace!” His disciples remembered that it was written, “Zeal for your house will consume me.” The Jews then said to him, “What sign can you show us for doing this?” Jesus answered them, “Destroy this temple, and in three days I will raise it up.” The Jews then said, “This temple has been under construction for forty-six years, and will you raise it up in three days?” But he was speaking of the temple of his body. After he was raised from the dead, his disciples remembered that he had said this; and they believed the scripture and the word that Jesus had spoken. When he was in Jerusalem during the Passover festival, many believed in his name because they saw the signs that he was doing. But Jesus on his part would not entrust himself to them, because he knew all people and needed no one to testify about anyone; for he himself knew what was in everyone.

Congregational Responses:
No, anger is a sinful emotion that leads to uncontrolled behaviors.
If God is jealous and Jesus gets upset with Peter, then anger is appropriate for us too.
Jesus’ anger gives us to feel every human emotion.
Yes, if anger animates redemptive purposes.

In 5th grade, before school every morning, my dad and I would go to McDonalds. Our deal was that he would pay and I would clean up.  After there was nothing left but a pile of wrappers and greasy fingers one morning, I picked up our tray and headed for the trash can.  A white guy stopped me saying, “You don’t have to do that, that’s what the people working here in uniform are for.” I didn’t understand and kept walking but he interrupted again, saying, “You don’t have to clean up because that’s what black people do.”  Up until that moment, I had never seen my father in a public rage. He got in the guy’s face, there in the middle of the restaurant, and said, “We’re not leaving until you apologize to my son for your bigoted remarks.  We’re not leaving until you apologize for denigrating an entire race of people.”  After the man apologized, I learned on the way to school that my dad had made a pledge in his prayer group earlier that week to speak out against injustice.

Turns out my father was following a Savior who kicks over tables, who cracks the whip, who shouts in raging tones, “No, animal sacrifice is not required to be in relationship with God.”  “No, the temple isn’t a building but a body.” “No, the kingdom is not a transaction to be bought or sold.”

Is anger Christian?  Not if it leads to prejudice and abuse and hate.  But if righteous indignation mobilizes our protest, if it intensifies our commitment to the causes of God, and if it holds a boundary that cannot be crossed without consequence, then yes, anger is absolutely Christian.

Just pick up the newspaper and read the headlines about Newtown, Orlando, Ferguson, Charleston, and Charlottesville and it will be obvious that Jesus doesn’t need anymore unemotional disciples, only passionate people of faith willing to love the world enough to be angry with it.  So see red, get pissed off and follow your fury where Jesus leads.