MENUCLOSE
Getting to know Bill 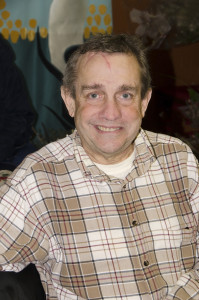 We enjoyed meeting and getting to know a new friend, Bill, recently. This was his first time attending HSC. He came to Asheville from Bakersville, and is staying at the mission.

Bill is living proof that life on the streets can be difficult and very dangerous. Showing us his fresh scars, he told of being hit on the head and robbed of $40 about a month ago. He has no idea who or what hit him. He says he is doing well now, and is slowly regaining his memory.

He has a strong faith, and told of growing up in a rather liberal Baptist church in Bakersville. He was proud of the fact that his mother became the first female deacon in that church. He says he is interested in attending our Story Circle, because “we all have our stories.” We look forward to hearing more of his story!