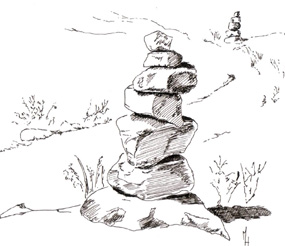 Religious tourism is up over 150%.  More and more travelers are leaving home to find meaning abroad.  Chanting with the monks in Thailand; breathing with the Sufis in India; seeking counsel with the shaman in Peru; pilgrimaging with the seekers in Ireland.  To encounter the holy, a suitcase, plane ticket and stamped passport are going to be required.

When Jacob hit the road, he was anything but a tourist seeking spiritual insight.  Instead, he had colluded with his mother to steal his brother Esau’s birthright and was now a panicked fugitive. On the run, he ran until night fell on his footsteps and forced him to stop somewhere between Beer-sheba and Haran.  There, with a rock for a pillow, Jake passed out into a deep sleep where God offered him a number of promises.

What does God promise?

Genesis 28:10-19 Jacob left Beer-sheba and went toward Haran. He came to a certain place and stayed there for the night, because the sun had set. Taking one of the stones of the place, he put it under his head and lay down in that place. And he dreamed that there was a ladder set up on the earth, the top of it reaching to heaven; and the angels of God were ascending and descending on it. And the Lord stood beside him and said, “I am the Lord, the God of Abraham your father and the God of Isaac; the land on which you lie I will give to you and to your offspring; and your offspring shall be like the dust of the earth, and you shall spread abroad to the west and to the east and to the north and to the south; and all the families of the earth shall be blessed in you and in your offspring. Know that I am with you and will keep you wherever you go, and will bring you back to this land; for I will not leave you until I have done what I have promised you.” Then Jacob woke from his sleep and said, “Surely the Lord is in this place—and I did not know it!” And he was afraid, and said, “How awesome is this place! This is none other than the house of God, and this is the gate of heaven.” So Jacob rose early in the morning, and he took the stone that he had put under his head and set it up for a pillar and poured oil on the top of it. He called that place Bethel; but the name of the city was Luz at the first.

Congregational Responses:
To never leave Jacob.
To be intimately involved in the human condition.
To provide provision to Jacob regardless of his character.

James Martin, a Jesuit living in New York City, was asked about his spiritual conversion to the priesthood during a recent interview. He said, “I wasn’t praying in church before a statue of Mary, saying please make me a priest. I was tired at the end of the day, a terrible day, had just finished a bowl of spaghetti that I’d heated up, and I was watching PBS [a documentary on Thomas Merton] and that’s where God met me. Because that’s where I was.” (On Being)

Regrettably, most of us don’t practice Ignatian spirituality.  Instead, we point to a God over there who only resides in the gilded temple but not the wilderness tent, who is only present at the high Mass on Sunday morning but not the get down dance club on Saturday night, who is only read in one book but not in the pages of poetry, who is only encountered in a different time zone but never in the here and now.

Yet one of the deepest truths of Christianity is that God has abandoned the stars of the sky for the dirt of the earth; God has climbed down the ladder leading up to heaven in order to take up residence in our daily lives.  This is where God goes: the domestic, the mundane, the routine, the overlooked, the boring, the every day, because that is where our lives are most lived.  The promise God makes to all of us is, “I am with you.” I’ve come to love you right where you are, not where you think you need to be.

While Jacob was no model of morality, but he did stop long enough to recognize the God in his midst.  He did realize that God has a habit of hiding in plain sight.  He did acknowledge that it is the obvious and ordinary that’s usually most holy.  He did affirm the most basic of all affirmations, that “Surely, the Lord is in this place.”

So if you’re a wanted fugitive or if you’re a religious tourist packing your bags for the next trip, be reminded that you’re already where you need to be, that the ground you stand on has already been consecrated, and all that’s left to do is find a pile of rocks and build “an altar in the world.” (Barbara Brown Taylor)