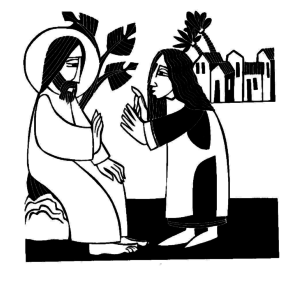 If invited to join the editorial board of the Bible when the cannon was being created, I would have immediately removed a number of stories: the sacrifice of Isaac by father Abraham; the destruction of humanity by flood; the killing of the first-born sons; the job requirement of discipleship to hate your parents; the parable of the ten virgins.  These texts are nearly impossible to preach; they confuse the reader; they make God look bad.

But worst of all, the story I would reject first, is today’s text. Jesus is a jerk, not once or twice but at least four times in eight verses.  He says and does things that are entirely contrary to everything we understand about his ministry and messiahship.  He behaves like a petulant Sadducee, not a gracious and inclusive and loving Savior.

Still, thousands of years later, Matthew 15: 21-25 remains.  So why is this story included in the Bible?

Matthew 15:21-28 Jesus left that place and went away to the district of Tyre and Sidon.Just then a Canaanite woman from that region came out and started shouting, “Have mercy on me, Lord, Son of David; my daughter is tormented by a demon.” But he did not answer her at all. And his disciples came and urged him, saying, “Send her away, for she keeps shouting after us.” He answered, “I was sent only to the lost sheep of the house of Israel.” But she came and knelt before him, saying, “Lord, help me.” He answered, “It is not fair to take the children’s food and throw it to the dogs.” She said, “Yes, Lord, yet even the dogs eat the crumbs that fall from their masters’ table.” Then Jesus answered her, “Woman, great is your faith! Let it be done for you as you wish.” And her daughter was healed instantly.

Congregational Responses:
It’s a cautionary tale about compassion fatigue, that even Jesus can become calloused.
Jesus has his most human moment, a reminder that all of us fall short.
The Canaanite woman converts Jesus to a more expansive welcome.

The artist Eminem has sold 150 million records while defying nearly every stereotype of rap.  He’s white in a primarily black industry, grew up in Detroit instead of New York or L.A., has a high pitched nasally voice instead of a smooth baritone.  In an interview, he was asked about his unlikely success in the music industry and what he has figured out about writing songs.  He said, to paraphrase, you’ve got to get the hook of the song right, the part that draws people in.  I work on it and work on it and work on it… until it gets stuck in my head and I can’t get it out.  Once it starts to irritate me, to be an aggravation, that’s when I know it can be a hit song.

Regrettably, Christianity has often been confused with polite society as if being a believer means never raising your voice, whispering soft verbs in the church parlor and only approaching God during office hours. But, just as Eminem learned that irritated listeners quickly become paying customers, the Canaanite woman realized that getting God’s attention, sometimes, requires faithful agitation, a holy hostility when life becomes desperate.  For repeatedly interrupting a man’s world, trespassing the boundaries of Tradition, pestering a Savior with his highest ideals, the Canaanite woman’s story was preserved in scripture.

So, if the churchmen in your life are trying to send you away, then refuse to be moved. If the Son of David is ignoring you, then shout your voice in the name of mercy.  If the shepherd dismisses you as a goat, then keep bleating out until he recognizes you as a lamb.  If the banquet steward doesn’t send an invitation, then demand a seat at the Table until you’re served.

And if you’re a mother frantic to heal your possessed daughter, then refuse to accept no for an answer.  Kick and scream, carry on and be a bother, act out in the name of Jesus until Jesus gets irritated enough to respond.  Because when it comes to begging for help, especially on behalf of a loved one, be encouraged that it is the most annoying who are finally answered.