MENUCLOSE
James Bryan Perry, a budding historian in our midst 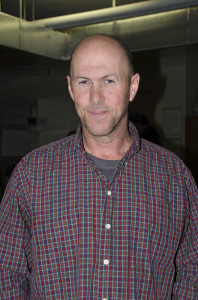 Getting to know James Bryan Perry has been a time of serendipity! Bryan, as we know him, recently got out of prison and is currently staying at the Rescue Mission. His warm and ready smile, pleasant and friendly manner, and engaging, intelligent conversation make him a delight to be around. Bryan, who dropped out of school but got his GED, fights the battle of alcoholism and participates in a recovery group. He says he is trying hard to get his life straightened out, and is very thankful for the support of both his family and Haywood Street Congregation.

Bryan became interested in the history of the church, and has been somewhat amazed at what he has discovered — his family roots here go back even to the days before this building became a United Methodist Church: “…I learned all this after I became homeless and hungry. Now I go to the same church building that my great-great-grand parents went to. I go to the Haywood Congregation every Wednesday, and enjoy church, food, and fellowship with the wonderful people here. Pastor Brian Combs has been a great help to me, and I stop in to see him every chance I get…”

He has written a brief history of his family’s involvement, and we’ll let him tell the story in his own words:

First of all, I am so thankful to be able to write this letter. For some reason I feel myself drawn to this church and this street. I feel at home. I find myself studying the church history and members, deeper than I ever imagined. I had no idea that quite a few of my ancestors were involved in this church. I didn’t realize there were so many amazing details to share.

As a native of Asheville, I have always been interested in Asheville history. My maternal granddad, Frank Thorn Leppert Jr, also a native of Asheville, taught me a lot about his life in Asheville, while we worked together. He was born in 1920, and lived at 264 Haywood Street, within view of this church. He was born at the old Mission Hospital on Charlotte Street, and was the first in his family not born at home. His parents were Frank Thorn Leppert Sr. and Annie Victoria Low. Frank Sr. managed Asheville Seed Company, located where the Tops Shoe store is now. Rosa Low, my great-great aunt, was also a member of this church.

My granddad told me about the depression and how things were back then. He told me how a wagon used to come around to collect cans and metal for the soldiers’ helmets and boots.

He told me about his brother, James Low Leppert (born 1917), who died of pulmonary tuberculosis, at the age of ten. There was no cure for pulmonary pneumonia then, so if you contracted it, the chances were good that you would die. My granddad, Frank Jr., was about seven or eight then, and was devastated when he lost his big brother and best friend.

Canada Cowan, a silversmith, and his family also attended this church in the mid to late 1800’s. His first wife was Mary Miller Cowan, also of this area, by whom he had 15 children. According to his obituary, he was considered one of the most efficient officers of the church. He died in 1887 and Rev. Dr. Bays officiated at the service. He is buried at Riverside Cemetery. They were Annie Low Leppert’s grandparents.

My maternal great-great-grandparents, John Fleming Morris and Nannie Ella Finch Morris, had moved their family of seven from Old Fort to Asheville by 1900. John was an engineer on the railroad and transferred here to work on the Southern Railway in Asheville. He built a house at 25 Pearl Street, about two blocks from this church. He and his family attended the Methodist Episcopal Church, in this building, and his children were baptized here. Unfortunately, John F. Morris was killed in June 1906, when he was run over by a train in the rail yard, while gathering excess grain for his family. He left three boys and two girls, for his widow to raise alone. One of those girls was my great-grandmother, Mabel Edith Morris, who attended this church as she grew up. As a young girl, she was fed spiritually here, and she grew up to be a kind and loving woman. After she married John B. May, they moved to West Asheville, where he opened May’s Market. She attended Trinity Methodist Church, until she was physically unable to attend church.

I learned all this after I became homeless and hungry. Now I go to the same church building that my great-great-grand, parents went to. I go to the Haywood Congregation every Wednesday, and enjoy church, food, and fellowship with the wonderful people here. Pastor Brian Combs has been a great help to me, and I stop in to see him every chance I get.

The Morris and Cowan,’s homes are gone now, as is the Leppert’s home, which was just across the street and a few lots up, from Haywood Church. Sometimes when I walk down the street I think about what it was like when my granddad was a child, walking down the same streets.

People have been praying and singing here for over a hundred years, so no wonder if feels wonderful to come here. Now that my granddad has passed, I realize that he was a good teacher. He taught me about honesty and the difference between good money and bad money. He also showed me this by the way he lived.

One day he had me use a push plow in the garden, and after a few minutes of really hard work I asked, “Isn’t there supposed to be a horse in front of this thing?” He said, “I have one!” I looked around for the horse, and he started laughing.

He told me about his mother feeding anyone who was hungry that walked down Haywood Street. She took them in the kitchen, sat them at the table, and fed them. Her husband, Frank Leppert Sr., would tell her it was dangerous and not to do it, but she continued anyway, and she never had any problems. She showed God’s love to everyone like the Welcome Table does today.