Steven Cole led a lot of lives in his 51 years. As a teenager he was a talented wrestler, lettering as a high school freshman. At the age of 19 he became a husband and a father. Later in life he was a chef for the Seattle Seahawks, a construction worker, and a painter. 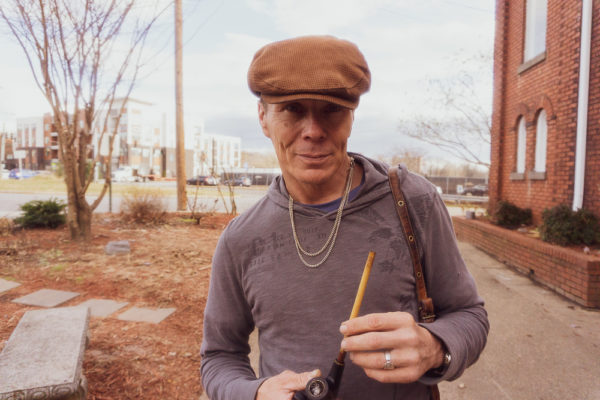 Here at Haywood Street, we knew him as a friend. With a pipe in one hand and two leashes in the other, Steven often ventured from his campsite to spend time here at Haywood Street. His voice and the sound of paws rustling about on the hardwood floors was a familiar sound in our halls. One that invited us out of our offices one by one eager to spend time with someone who felt like an old friend whether you’d known him for weeks or for years. And to give treats to the dogs of course.

Steven was a good friend. When he asked you how you were doing you could tell that he genuinely cared about your answer. He was also a more honest man than most. Unafraid to share about the realities of his struggles with addiction, Steven journeyed through his ups and downs candidly.

He would tell you himself that when he was using, he was seeking relief from the pain of fractured relationships. And reprieve from the disappointment of altered plans and dreams. He knew the ease of a quick fix. But at the end of his life, as he wrestled with the news of a life-threatening condition, Steven began to seek more than just a cure for his failing heart.

In Chapter 5 of John’s Gospel, Jesus approaches a man at the pool of Beth-zatha. For 38 years this man laid within arm’s reach of its healing waters, but never felt the relief of his ailments. Aware that this man was waiting to be healed, Jesus asks him a different question “do you want to be made well?”

But after being stepped over for so many years by people shouting for joy and exclaiming that they had been healed, the man could no longer imagine a reality in which he was healed, let alone made well. He was seeking a physical, bodily healing, but Jesus invited him to more. He invited him to a type of wellness that no waters or doctors could provide.

When Steven discovered that his heart was failing, he immediately pursued the advice of medical professionals and underwent several procedures to preserve his life. But throughout his several weeks of treatment, Steven also said yes to an invitation to be made well.

He began the process of healing from years of self-imposed isolation. From shame that made him believe the lie that he had to do life alone. From the experiences in his life that taught him to ration his trust.

Like the man at the edge of the water, a part of Steven likely believed that his chance for healing had passed. That his destiny was to remain within arm’s reach of change with no one to lift him up from his mat and into the water. But when his diagnosis required him to ask for help, Steven discovered a community waiting to be deployed into action on his behalf.

After his first hospital stay, Steven was given a place to rest inside. A place that not only welcomed him, but welcomed his dogs, Hardy and Adele. And when he was worried about where his dogs would go while he was in the hospital, he had people lining up to take them home so that he could focus on his health. As he struggled with the deeper meanings of a near death experience, he had a small council of trusted sages in his life processing with him.

In one of the last texts that Steven sent before he passed away, he said “I’m not used to having friends like this, I always depend on myself. You people have taught me a valuable life lesson. Thank you for showing me a side of humanity that I wasn’t sure even existed.”

I believe that throughout Steven’s life, there were always people guiding him towards wholeness whether he knew it or not. But this time he said “yes” when asked “do you want to be made well?” He allowed the people in his life to care for him and for the first time in a while he wasn’t running the race alone.

In John’s Gospel, we are reminded that God is always inviting us to pursue the waters of wellness. And when the world convinces us that we must do it alone, that there is no one there to help us into the pool, God reveals God’s self through community. Through relationship. Through the relentless forces of love in our life that invite us to seek lasting wellness in the place of quick cures.

While we all wish that Steven’s body was cured and that his voice would still fill the halls of our building. Or that we could find him just around the corner waiting to ask us how our day had been, let us rejoice in knowing that Steven got a taste of wellness here on earth. And that now his Spirit will dwell in a wellness beyond anything this world can offer, forever.

The ultimate witness of Steven’s life was his reluctant “yes” to wellness. May we honor him by pursuing that which makes us well. Amen.