MENUCLOSE
Life looking up for Sherry 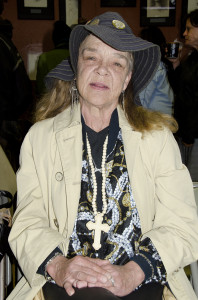 Waiting for a haircut Wednesday, our friend Sherry Liner was eager to share with us the good news of how much her life has improved since she finally got an apartment. Sherry, who suffers many health problems, had been living in a tent for months and, as she said, “was at death’s door” last spring. She recalled how the tremendous stress of that lifestyle had sent her blood pressure skyrocketing, to the extent that she had suffered five seizures in one day. She also has other heart-related issues, and had endured surgery for a detached retina during the time she was camping.

She has not had a single seizure since moving into her apartment almost a year ago, and says her overall health has improved greatly. Her vision is slowly improving too. For a while after the surgery she saw two of everything but, though things still look somewhat blurred, the double vision issue seems to have resolved itself.

Sherry told us excitedly how she enjoyed decorating her apartment for Easter, describing wreaths she made herself, and said it meant so much to have a home and to be able to do that. When we asked for a photo to share, she wanted to be sure we captured her cross necklace, because “God has been so good to me!”