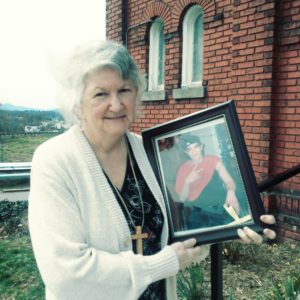 Nicki is a faithful companion at Haywood Street. I’ve only ever seen her shine light on others, so I’m taken by surprise when she steps into the spotlight at the beginning of service. She has asked Pastor Mark if she can share some memories of her son, Zech. Today is the five year anniversary of his passing.

Mark and Nicki stand together at the holy water font, Mark holding a framed photograph of Zech. Nicki reads her son’s favorite scripture. She takes her time because she, and Zech, deserve this time.  Nicki then picks up a few index cards and a single page of typed notes. She has given this page a heading that reads, 5th Year Anniversary of His Death: “Zech” Zechariah Lee Adams. She stays on script at first, telling us about how he loved basketball and swimming at the neighborhood pool. Soon though, her memories begin to shift from the things Zech liked to do, to who Zech was a the center of his being–and no amount of paper can hold all of that.

Nicki tells one story of how she used to volunteer with Room at the Inn. Having stayed the night with unhoused women, she would return home in the morning, just as Zech would be preparing for school. Nicki tells us how Zech would ask how her night had gone and he would ask how all of the unhoused women were doing. Nicki pauses, shakes her head and says, “I just can’t believe how thoughtful he was.” She repeats this sentiment in various ways and I recognize what she is experiencing as profound–the pure and boundless love a child has for their mother.

Zech experienced an accident that left him paralyzed and eventually led to his passing. In his last 6 months, he told his mom that he wanted a hug and a kiss everyday. Nicki responded, “Well then we’ll do that.” As his condition progressed, a hospital bed was brought into their home. Nicki and Zech settled into movie marathons, mostly action films. Zech would  watch from the bed and Nicki from Zech’s wheelchair. The following night, they would switch. And this continued for months until Zech’s condition progressed. He stopped getting out of bed and Nicki began curling up beside him.

As Nicki stands before us and speaks of her son, her voice does not shake. She is poised. She speaks less about the loss of Zech and more about the gift of him, her gratitude for the years they shared.

Thank you Nicki. We delight in the memories of your child and your example of indelible grace.