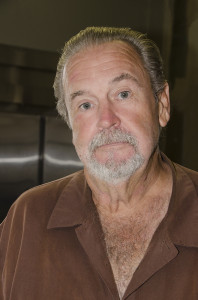 A man sits alone on the back pew, looking downcast — almost bedraggled, I’d say. He needs company, I say to myself. So do I. I join him, get his name: Raice. He’s not holding a bulletin; I try to share mine; not much luck, even when I try underlining the text with my finger. “Maybe he doesn’t read” occurs to me. “Maybe he wishes I’d disappear” also does… Time for Communion; I indicate “let’s go.” He shakes his head, muttering “I don’t deserve it.” “Of course you do,” I counter. (I’m thinking it’s not about deserving; it’s about an offer we need only to accept, but there’s no time to get verbally theological.) We share Communion, the service ends, we hug — warmly, as I recall. I have only his name, Raice, and the hope that I’ll see him again.

Another Wednesday: He’s downstairs getting a haircut, looking downright dapper and glad to see me (Whew! What a relief). Ann takes a picture. Now he tells me pieces of his story. He speaks of being caught in “the quicksand of homelessness.”

Raised in Tennessee by Cherokee grandparents who pasted newspapers on the walls for him to read, he must have caught on quickly. Later earning a Master’s degree in Business, he’d prospered in the field of construction in Florida. But in a more recent move to North Carolina for a big job that fell apart, he encountered hard times and a betrayal that left him with the loss of all worldly goods except his truck.

I also learned that he is a Vietnam Veteran who spent months in Walter Reed Hospital with a back injury.

More Wednesdays go by. What’s happened to him? (a typical HSC companion’s concern). Then, lo and behold, I get a phone call (how did he get my number?). He’d been living in Veterans’ Quarters on Tunnel Road, with a new project that took up his Wednesdays. Says he’ll be shifting work days to alter that!

Now I get a beautifully handwritten letter about the project. “Handicapped, Retired, and Homeless Veterans offering Exotic and Rare Wood Products (canes, knives, etc.). And it comes with a private room and a desk!

“Photographs are like Footsteps in Life, from the First Steps to The Last Steps, They Allow our Friends and Loved Ones to share their journey.

May Eli Start his journey with a Kind Heart, a Desire to Succeed, and the Courage to Accept Others as They Accept Him… Give No Quarter, nor Accept it, and always see Every Breath as a New Beginning…”

Yes, and I hope this is a new beginning for Raice, and that I will see more of him on Wednesdays — and maybe even find out more about his last name “Csutoros.”