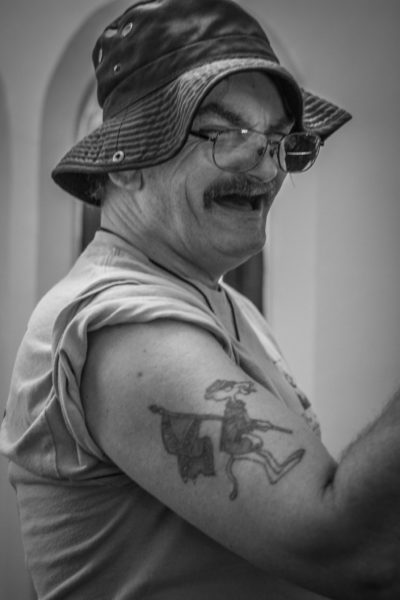 ‘’I reckon it was around 1994–the bull tattoo. I was recovering from a spinal cord injury, going back and forth between doctors. And then one day I just decided to take a detour and head to the tattoo parlor.”

Robert tells me there’s not a lot to that tattoo. “It’s just ‘cause I’m a Taurus, you know…stubborn, hard headed, hard to get along with sometimes. But, also compassionate or something. I don’t know, I’d have to look up the definition again…”

Robert figures he got the bull tattoo right before his social security money started coming in. He knows when he got his first social security check because that money got him to Atlanta for Dale Earnhardt Junior’s seventh championship.

“I’ll tell you one thing though. It sure did hurt.” “Well don’t they all?”, I ask. “Not this one.” Robert pulls up his shirt sleeve to reveal another piece—this one of The Pink Panther holding a Confederate flag. “How about you go ahead and tell me that story,” I strongly suggest.

Robert rolls his eyes but he knows the gig. It’s easier to just start talking than to have me beg and plead it out of him. “Well the old Robert was drinkin’ liquor and eatin’ pills at a bar out in Lake Lure and the next day, I woke up with a baby diaper wrapped around my arm and this tattoo underneath it.” “You remember any of that?” “I don’t remember a thing. People often think the worst of this tattoo, but it ain’t a sign of racism or anything like that. It’s a sign of stupidity. It’s a sign of what drugs and alcohol will do to a person.”

Robert goes on to tell me about his friend, Matt, who has offered to pay for a cover-up; anything so that Confederate flag can’t be seen. But Robert doesn’t feel compelled to take him up on it. “I know it doesn’t mean anything. It’s really just the aftermath of a party gone bad.” “Do you think part of you choosing to not cover it up is so that you can be reminded of how far you’ve come?”, I ask. “I don’t know. I’ve never thought about that, but yea…you’re probably right. It’s just simple to me. It’s a cartoon. And life’s kind of a cartoon. It’s all just supposed to be fun. And if it stops being fun, it’s time to move on.”

I always record these interviews, let them sit for a few days, come back to listen when my head’s cleared out—when the story has had time to simmer and it’s meat can fall a bit easier off the bones. I return to Robert’s story about a week after its collection, go down to the garden, find a bit of solitude at an old picnic table. I listen back to 17 minutes and 37 seconds of recording. I cry and laugh for a total of 25 minutes and 42 seconds. There is the most beautiful juxtaposition to this recording—It is where the rough edges of Robert’s past, meets the softness of his present. It’s where every time he’s knee deep in story about drugs and drag out bar fights, you hear someone walk by and thank him for taking care of the church sanctuary, for making beautiful flower arrangements, or for some other good and kind deed.

That kind of intersection is Haywood Street. The alter is prepared by a formerly incarcerated man. Your made-from-scratch meal has been blessed by a single mom in the throws of addiction. The teenage boy who grabs your hand for the recitation of The Lord’s Prayer, is the same hand that brandished an illegal weapon last week. At Haywood Street, folks bring their pasts, plant them into the soil and watch what holy ground can do to even the most severed roots.

It’s like Robert has spent enough time in the void of beauty, that he knows its real worth. He understands how pulled weeds, new stone paths and rose filled vases are the stuff of dignity restoration. He is absolutely relentless in the upkeep of God’s house.

The bull does not stop until the work is done. Perseverance, Robert. That’s the definition of a Taurus.