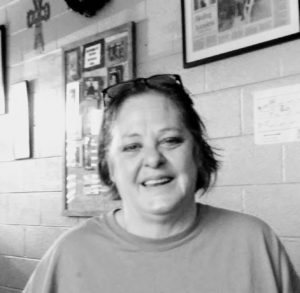 Robyn was recently staying at Room at the Inn when she developed an aggressive respiratory ailment. A woman there told her, “You need to rest,” and suggested she spend some time at Haywood Street Respite.

It’s still early and I’ve just joined Robyn and the others for Respite’s morning devotional group. Robyn has agreed to tell me a story. I tell her it can be as simple as how her grandmother made angel food cake, but she goes straight to the beginning—her childhood in the Middle East. She tells her story quick. There is an urgency to get through the rough parts and straight to the good stuff. And the good stuff is simple. It is the friendships she is making at The Mission. It’s how she’s helping a girlfriend kick the bottle. The good stuff is maintaining her own sobriety and getting her sense of humor back. It’s her love of murder mysteries and strong plots twists.

Robyn begins her story with a memory of her parents singing her lullabies. She leads me through a wild adventure which includes becoming the queen of karaoke. The chapters of Robyn’s life seem to have an interesting relationship with music, and the times when it is absent.  The fact that her name denotes a beautiful songbird is not lost on me. She closes her story with a memory of sharing lullabies with her daughter and this memory feels like it holds her whole world in it.

The American Robin makes its appearance at the end of winter. It is the beginning of March so my friend is right on time. The bird’s song is often described as, cheer up, cheerily cheer up. Robyn tells me Respite has been, “Good for the soul” and I can see it. I can see her cheering up. I can see her healing up. I can see her preparing for the hopefulness of spring.

Robyn, we are so happy you came to rest with us.