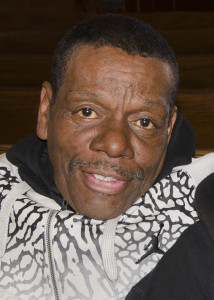 Sitting next to Rodney at The Welcome Table one day, we were chatting and he began to tell His Story. Of course we all have a story to tell and he shared his openly and with ease. Many years ago Rodney was serving in the military during ‘Desert Storm’. It was a very difficult assignment, and upon returning home he found himself doing things that he would not normally have done. He did not understand why he was doing “bad things”. This behavior continued and as a result he was incarcerated for many years. As hard as that was he says, with a smile, he did “learn to read and write while in prison.”

Rodney developed a very serious health concern and was sent to The V.A. Hospital in Asheville. With time his health issue improved and seven years ago he was diagnosed with PTSD (Post Traumatic Stress Disorder). Now he finally had an answer for his bad behavior. He was relieved to know what was happening to him. With treatment, he is doing very well!

During his time in Asheville, Rodney says he “found God” and relies on Him for everything! What a wonderful, personal story he was willing to share.

It is a privilege to be given another person’s Truth! It was a gift to receive part of Rodney’s life story in our conversation.

Thank you, Rodney, for sharing yourself and especially for your service to our country. Please keep him and all of our service men and women in your hearts and prayers.