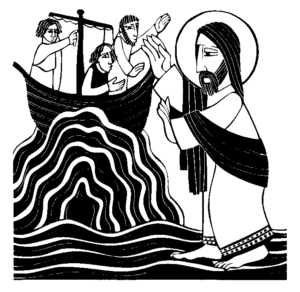 It’s easy to dismiss Peter for how often he screws-up.  He claims to be pure, saying nothing dirty has ever touched my tongue. He hushes Jesus, stop all your talk about wooden crosses and shallow graves.  He ignores the Prince of Peace, pulling out his sword and cutting off a servant’s ear.  He denies being a Christian three times, no, no, no, I’m not a follower of the Christ.

But even with all of his disasters in discipleship, Jesus still ends up choosing Peter to be the Rock, the cornerstone of his Church to come.  So in today’s text, what does Jesus see in Peter that’s so faithful?

Matthew 14:22-33 Immediately he made the disciples get into the boat and go on ahead to the other side, while he dismissed the crowds. And after he had dismissed the crowds, he went up the mountain by himself to pray. When evening came, he was there alone, but by this time the boat, battered by the waves, was far from the land, for the wind was against them. And early in the morning he came walking toward them on the sea. But when the disciples saw him walking on the sea, they were terrified, saying, “It is a ghost!” And they cried out in fear.  But immediately Jesus spoke to them and said, “Take heart, it is I; do not be afraid.” Peter answered him, “Lord, if it is you, command me to come to you on the water.” He said, “Come.” So Peter got out of the boat, started walking on the water, and came toward Jesus. But when he noticed the strong wind, he became frightened, and beginning to sink, he cried out, “Lord, save me!” Jesus immediately reached out his hand and caught him, saying to him, “You of little faith, why did you doubt?” When they got into the boat, the wind ceased. And those in the boat worshiped him, saying, “Truly you are the Son of God.”

A compulsion to reach God regardless of the circumstances.
If the Church is the boat, then Peter knew to get out of the sinking ship.
Like the mustard seed, short Zacchaeus and the little children, Jesus believes in the smallest.

Every boater’s manual instructs that in the event of an emergency, stay in the boat.  On board there’s a first aid kit under the seat in case of injury; a head in the cabin in case of illness; food in the galley in case of hunger; a GPS on the cockpit if things go off course.  All good reasons to stay in the boat.  And that’s exactly what the other eleven disciples did.

But the guidebook that is the Gospel of Matthew isn’t interested in safe boaters but rather daring believers who realize what’s not in the boat.  Jesus isn’t in the boat.  When the storm is surging and the waves are crashing and the wind is howling, discipleship is defined by what you’re willing to do to get closer to God.

Dietrich Bonhoeffer, preaching on this text, said, “Peter had to leave the ship and risk his life on the sea… If Peter had not taken the risk, he would have never learned the meaning of faith… Unless a definite step is demanded, the call vanishes into the air, and if people imagine they can follow Jesus without taking this step, [this risk] they are deluding themselves like fanatics.”

So Peter broke with the safety protocol, let go of the oar, unbuckled his life jacket and jumped overboard. He believed that life with God can’t be lived starboard side, that we are commanded to walk beyond the water’s edge, that lack of faith isn’t sinking, lack of faith is refusing to get wet.

Despite his mistakes, Jesus picked Peter to lead his Church because the Rock so often does the very thing most of us are too scared to even consider.  So if you’ve decided to remain where you are, choosing to wait out the raging sea, “take heart and do not be afraid.”  Jesus doesn’t need anymore dry deckhands, only more reckless disciples willing to take the plunge, to thrash about in the deep end and never touch bottom.