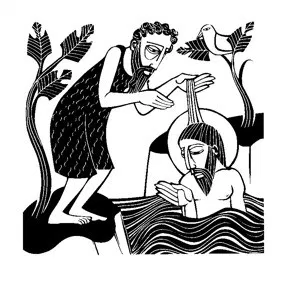 Church attendance is down across all mainline denominations.  A few Sundays, in particular, are the worst.  Super Bowl Sunday is usually a bust, the game more captivating than the Gospel.  Same for stewardship Sunday, giving Jesus your heart is apparently much easier than handing him your wallet. The last Sunday of the year is usually empty, people more interested in dragging their trees out to the curb than lingering at the manger.

But two thousand years ago, on the first Christmas, the church was packed.  Farmhands from Judea left their oxen in the ditch and aristocrats from Jerusalem skipped their tee times, Bedouins camped in the desert abandoned their tents, and everybody else in between showed up in haste for the service.

According to Mark then, why did the whole Mediterranean world show up for church in the wilderness?

Mark 1:1-8 The beginning of the good news of Jesus Christ, the Son of God. As it is written in the prophet Isaiah, “See, I am sending my messenger ahead of you, who will prepare your way; the voice of one crying out in the wilderness: ‘Prepare the way of the Lord, make his paths straight,’” John the baptizer appeared in the wilderness, proclaiming a baptism of repentance for the forgiveness of sins. And people from the whole Judean countryside and all the people of Jerusalem were going out to him, and were baptized by him in the river Jordan, confessing their sins. Now John was clothed with camel’s hair, with a leather belt around his waist, and he ate locusts and wild honey. He proclaimed, “The one who is more powerful than I is coming after me; I am not worthy to stoop down and untie the thong of his sandals. I have baptized you with water; but he will baptize you with the Holy Spirit.”

Congregational Responses:
To witness a Savior wearing sandals, not a golden slipper.
God wasn’t showing up in civilization.
They come up empty everywhere else.

Years ago, N.P.R. ran a story about a father who noticed his son’s changing lifestyle: new friends and new behaviors.  Dad surprised himself by starting to tape record his son’s phone calls.  After work, he would come home and listen to hours of tape, listening for the drug resupply, the party to get high, the next troubling event.  And then Dad would invent a reason for his son to miss these appointments: “I need your help with a project or let’s go on a camping trip together.”  But the interventions didn’t work, just like the past punishments didn’t either. After another set of indiscretions, the son waited for the next ruling: military school, no car, grounded for a decade. His dad, instead, said, “I have forty tapes, 90 minutes long.  There is no punishment.  I just ask that you listen to the tapes yourself.”  The son did.  And what he heard was a human being so addicted that he had lost empathy, had become cruel and egocentric.  He was just using everyone to get the next hit.  The son said, “having that kind of awareness, to really hear yourself as you are, was terribly painful but redeeming.”  The son couldn’t stand to be that person anymore until he wasn’t anymore.

Although the City says that a segment of the citizenry will never contribute to society; the jail says some inmates will never be rehabilitated; Religion says some sinners are beyond salvation; the treatment center says some addicts will never get sober, the Church is one of the last places that still believes you aren’t your mistakes, you aren’t your habits, you’re never too far gone.

While all of us are addicted to something- greed and money, privilege and power, lust and sex, suffering and struggle, rocks and bottles, success and failure, popularity and praise, and the list goes on… repentance is like listening to the secret tapes of our lives and realizing the person on playback is someone who has become unrecognizable to our truest self.

Regrettably, repentance has too often been defined as an oracle of judgment on the irredeemable that requires taking cover and hiding from the wrath to come.  But the word simply means, “to turn,” to pivot away from all that isn’t of God.  And when John, preaching with fire and fury, calls everyone to repent, he must actually believe we all can turn it around.

The whole world, then and now, overwhelmed by their guilt and despair, worn out from their cynicism and fatalism, showed up in the wilderness because that was the only place where the hopefulness of change was being preached, a message that God cares less about who you’ve been and more about who you’re becoming.

So, if in this Advent season you’re looking for a new beginning, then the instructions are simple: come forward to the font, take vows to be accountable to a life of recovery in God’s name, wade into the water of dying to our old ways and be baptized by the Holy Spirit as a new creation.