MENUCLOSE
“We thought we were really going to freeze to death!” 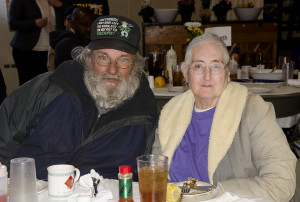 “We thought we were really going to freeze to death!” exclaimed Barbara. Sleeping in their van and ill-prepared for the sub-zero temperature of our coldest night this winter, she and husband Ronnie decided in the middle of the night to drive to Mars Hill, hoping to find a friend or relative there who would take them in. No such luck — they were turned away at every stop. Clinging to each other and shivering with cold, they toughed it out, and somehow managed to survive.

Ronnie, who can no longer work, has difficulty walking and has had many falls. The homeless life has taken its toll on both of them, especially since Barbara, a cancer survivor, is diabetic, and Ronnie has hearing difficulties and suffers from Parkinson’s. Barbara knows a good diet is very important for their health, but says its hard to manage when you literally don’t know where the next meal is coming from, or what it might be.

“What we need is a little one-bedroom apartment,” said Barbara. She feels they could afford rent (Ronnie gets disability) if the rent just isn’t so high. They have been together 44 years, having just celebrated their anniversary on Valentine’s Day. In spite of their struggles, they are a sweet and loving couple and manage to maintain a positive, up-beat attitude. If you hear of an affordable place near Asheville, please let them know!